Trump is dominating the news even more now than when he was campaigning. There was a spot of good news today. His pick for top national security adviser is praised in this article, with the caveat that honesty may mean he stays on the job only two months. Well, let's be optimistic and hope for much longer than that.

Corey Lewandowski, Trump's former campaign manager (with similar lack of tact with women), doesn't seem to agree with Trump's statement that his administration is a well-oiled machine. He says that Trump is trying to get a lot done, but his subordinates are a disappointment. Um, who hired them? Did he not choose well? I guess the blame has to land on Trump one way or another.

One hope I have for the new national security adviser is that he'll have a healthy distrust of the Russians. The Russian connection to many things Trump has me very worried. Pence might be visiting Europe and trying to reassure our NATO allies, but he's the VP, not Trump. Who really knows what deals Trump might be inclined to make? I take this article with a pinch of skepticism, but it does discuss the patterns that are so very worrisome.

And, as always, Trump attacks the mainstream media. The press isn't reporting on terrorist attacks. They are enemies of the American people. So far, his attacks are words only. If they turn to deeds, such as banning news outlets, launching trumped-up investigations, or inciting violence, then he will have gone into dictator-mode. 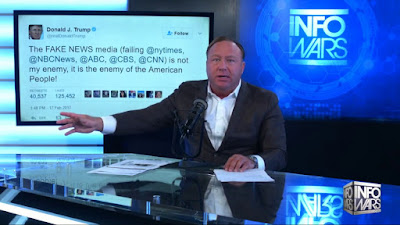 
Extras. Bob Corker, who sounds like a reasonable person, on his hopes that Trump will 'evolve.' Will Trump provoke a constitutional crisis by refusing to abide by judicial decisions? So far, he has obeyed while complaining very loudly. A more detailed article about the new pick for top national security adviser. How and why the CIA should cozy up to Trump, and the dangers if it doesn't work. The Anne Frank Center blasts Trump for not standing up to anti-semitism. The twitter responses are quite the window to accusations and counter-accusations.
Posted by ModeratePoli at 9:16 PM

My favorite Trump tweet is (paraphrasing) "The media is not my enemy. But it is the enemy of the American people."

Applying basic logic, Trump is proclaiming he is not an American (or, possibly, not a person, or both, if you apply logic strictly)!!

I wish a report would ask him this just to see if he even recognizes basic logic or if he somehow actually considers himself separate from the American people. The report should get him to either admit that he considers the media as his enemy (probably the truth if he wasn't posturing), or that the media isn't really the enemy of the American people. But both of those statements can't be true if Trump thinks he is an American human being. I, for one, have my doubts.