I've written about the 2009 stimulus for as long as I've had this blog. The conservative talking point is that the stimulus was a giant waste of money that added at least $800B to the national debt with little or no benefit. I believe that the stimulus helped lessen and shorten the recession. I have just a tiny bit of evidence, but the con forces have never provided even a scrap of evidence... until commenter John Riggins pointed to this study by economist John Taylor. (All graphs from this study.)

Taylor's conclusions are that that the stimulus was ineffective because the money went to spending that didn't help the economy:


The federal government only increased purchases by a small amount. State and local governments saved their stimulus grants and shifted spending away from purchases to transfers. Counterfactual simulations show that the stimulus-induced decrease in state and local government purchases was larger than the increase in federal purchases. Simulations also show that a larger stimulus package with the same design as the 2009 stimulus would not have increased government purchases or consumption by a larger amount. These results raise doubts about the efficacy of such packages adding weight to similar assessments reached more than thirty years ago.

Now, I suppose I try to look at the evidence without his conclusion in mind. When I do this, I see the evidence painting a somewhat different picture. Here is the most significant graph: 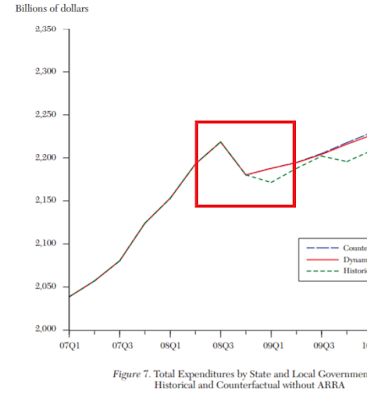 Actual data from that time (green dashed line) shows that spending by states went down, even with the stimulus support. Taylor runs some sort of model that shows without the stimulus (red/dashed blue line), states actually would have increased spending. He writes that they would have done this through borrowing.

This sounds like a load of bullshit to me. When I look at this graph, focusing on the area in the red square, I see state spending dropping significantly. After Obama's election, the drop in spending mediated somewhat, but didn't reverse until the stimulus was passed. My interpretation is that states were tightening their spending significantly as revenues dropped. Then, when help seemed imminent, they moderated that policy and started spending somewhat more due to the promise of federal funds. Without the federal funds, the drop would have continued and many more workers would have ended up unemployed, worsening the recession.

Taylor posits that, for some unknown reason, states would suddenly substantially increase their borrowing, and spend the borrowed money immediately: 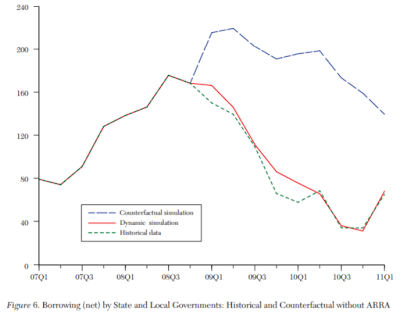 Is that what most states were going to do when revenue plummeted? Somehow I don't think so. I think they'd make some cuts, and maybe try to borrow more. The results that Taylor gets from his model are counterintuitive, and probably dubious when you think of how most states deal with revenue shortfalls.

I've expressed my opinion that payments to states were "very effective at reducing massive public job losses," and thus probably the most effective part of the stimulus. I see support for this opinion in the historical data presented by Taylor. A major drop in state spending was slowed and reversed due to stimulus funds.

Of course, I'm not an economist. Much of the verbiage in Taylor's report is meaningless to me. But it is clear that Taylor's model and his rosy conclusion depend on a huge and anomalous increase in states' borrowing.

Taylor's other conclusions, that tax rebates and other direct grants probably didn't help--I find that much more believable, though even then it's hard to know.

However, now I have one other data point that supports my contention that the stimulus helped. Thank you, John Taylor.

Extras. Summaries of nine studies. I got bored and didn't read the whole thing. A critique with some of the same complaints I had, but from a real economist. A more readable critique explaining how hard it is to figure out a model.

Update 8/3/17. I'm still defending the stimulus against conservative dogma that it didn't do anything but increase the national debt tremendously. However, today's argument spurred me to seek more sources, and I found some interesting ones. How states fared. Idiosyncratic review. I'm not the only one who says it would have been worse. A round-up of studies, which I'll read sometime.

Posted by ModeratePoli at 10:01 PM