Stuart Stevens, who didn't run a particularly good campaign for Mitt Romney, thinks he knows how to defeat Trump in the primaries.

First, you attack Trump as a lousy businessman. Uh,,, no. That's a bunch of boring details and back-and-forth. Being a good businessman didn't win anything for Romney, and Trump isn't winning on it either. Being a successful, rich celebrity inflates The Donald's ego, but isn't at all essential to his campaign or his appeal. So Stuart Stevens has this wrong.

Second, you attack Trump for not telling the truth. Ok, but this only works if Trump is clearly a bigger liar than the person making the charge. Trump can call Cruz the biggest liar because Cruz sent out nasty mail in Iowa, his campaign tweeted misleading information about Carson, he attacked Rubio about immigration while lying about his own vulnerability, his website had a doctored photo falsely showing Rubio shaking Obama's hand... and that was only in the last five minutes. So Cruz can't make that accusation about Trump. Maybe Rubio can attack Cruz that way, but only if he's been more honest and stays more honest.

Third, show that Trump doesn't have the temperament to be president. First, you have to make sure voters are paying attention, so you point it out at a debate. Then you insult Trump and get him really angry. Then the voters see that Trump isn't presidential material.

There are some problems with this strategy. You have to get Trump angry without being a total asshole. Possibly, since he's been forewarned, Trump won't take the bait, and he stays even-tempered. Then your argument will backfire. And finally, even if he gets angry and says some obnoxious stuff, how will that be different from 'Mexican rapists' and the other incredibly offensive things he's said that have actually raised his popularity? This might work with a candidate whose selling point isn't being obnoxious. I don't know that it'll work with Trump.

The last suggestions from Stevens are a jumble, which is ironic because you're supposed to accuse Trump of having a jumble of policies, including some leftist ones. (Very funny if GOP candidates would go after one another for having fake health care policies, or tax policies, or budget policies, or foreign policies.)

Finally, you attack Trump with the idea that he can't restore America's pride because he's a potty mouth. There's no way he'll bring dignity to the White House.

Yes, I'm sure so many Americans are so straight-laced that they can never vote for someone like that. I suspect Stevens hasn't listened to rap, or radio, or TV, or teenagers, or 10-year-olds, or anyone younger than 50. I can promise him that we don't talk like Mormons. 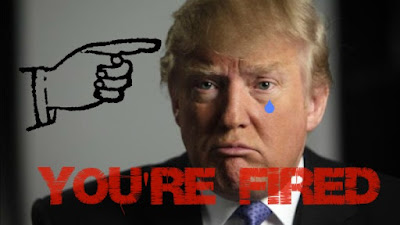 Extras. It was so much fun writing this as yet another GOP debate took place. Some of the best and/or strangest lines: (Three sources--Bernstein, Mother Jones, and my sweetie's twitter feed.)
And that's where the funny bits slowed down and I lost interest (except for the last two in the list). However, it seems like Trump got creamed. I can hardly wait for the next set of polls and/or primary results.
Posted by ModeratePoli at 11:40 PM

Today's GOP has never been summed up better and if the Democrats (and all reasonable people) don't seize on that expression to marginalize them it's a monumental screw-up for them. Memes today mean so much when people simply nod their heads in knowing agreement.

Further, the backstory on where the phrase came from -- which many people who here it won't know when that phrase is repeated again and again -- will only reinforce it's authenticity as an honest, spur of the moment assessment from an impartial source.

The key to any meme is stickiness. I saw when it happened but without closed-captioning, but I had the exact same thought in the mode of "this does not make any of them look good".

Of course, just like anti-smoking commercials, some people will have the opposite reaction. There is a large constituency for unintelligible yelling, but it's a minority.