Cruz lies about his tax plan

This is no surprise. All politicians lie. Most of them lie a lot about budget issues. So, despite what Cruz' idiotic adoring fans think, Cruz has told some whoppers about his tax plan. I got the scoop from Vox, and checked it out myself.

Cruz has a plan that favors the wealthy to an incredible degree. It starts with a flat 10% income tax. It eliminates payroll taxes. Both of these may sound great to working and middle classes, but they shouldn't celebrate yet. Cruz also proposes a 19% national sales tax which he pretends is a replacement for business taxes. This will hit consumers very hard, but it's a type of tax that's very popular with conservatives. They want to tax as much consumption as possible, saying that then the drug dealers and other criminals will have to pay taxes too.

Will this bring in enough money? Of course not. So Cruz, abetted by the Tax Foundation, waves a magic wand and predicts astonishing levels of job growth and wage growth.

Do his supporters know about his tax plan? Not that I've ever seen among his supporters/commenters on the threads I read. But even if they did know, they'd probably blindly have faith. The growth will happen. It happens every time a true conservative is in the White House. DON'T YOU KNOW THAT!!!!! 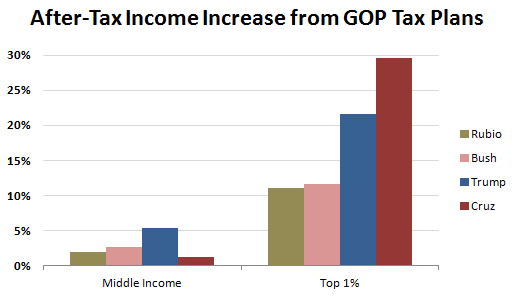 Posted by ModeratePoli at 8:44 PM

It's a myth that Texas is a low-tax state. I was there last year and there is an 8% sales tax on everything. Food, clothing, restaurants you name it. That means Texas has its hand in your pocket to the tune of 8% of everything you earn if you have to spend everything you earn.