He who must be defeated

For some GOP/conservative voices, he who must be defeated is either 1) Donald Trump, or 2) Ted Cruz.

National Review had an all anti-Trump edition. Let's see--the complaints against Trump are: his boorish behavior, doubts about his conservatism, doubts about his policies should he win, his ego, his lack of understanding about constitutional rights, etc. After reading all these critiques by conservatives, it's a good idea to read of a critique of their critiques. Jonathan Chait skewers the complainers, and throws all the criticism back at them--it's a fun read!

If you really hate one or the other, it's not hard to jump on one of these bandwagons. But what do you do if you're terrified of both Trump and Cruz? How do you decide who is the bigger menace to the GOP? Evidently, not even the GOP knows how to decide that. (Not that I have an answer--I have no fucking idea why either is such a threat other than the famous observation that suckers are born every minute.) 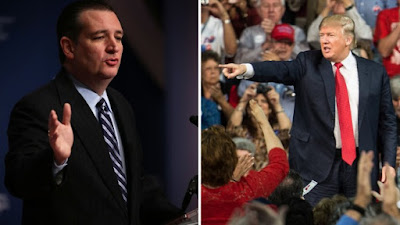 Extras. Another witty, delightful column by Jonathan Chait with a heart-warming chuckle at the end. Don't worry, be happy. Also, Donald the newbie to bigotry. I guess Donald wins the prize for column-inches, clicks, and news-minutes.

Update 1/24/16. Two more articles worth reading. The best and clearest article states that purists, pundits, ideologues, and heads of ideological organizations support Cruz and want to defeat Trump (because he's a loose cannon and private operator who might do anything, even something liberal). The people who want to be able to make deals, that is, the operatives, lobbyists, and pragmatic elected officials, remember Cruz shutting down the government and aiming at default, and they rather work with someone who'll make deals, so Trump is less scary. So that's the breakdown of who and why. For a few extra anecdotes and fun quotes, read this article too.

Update 1/30/16. This excellent readable article does a better job explaining why conservatives shouldn't support Trump than National Review did. Of course, it does that by telling how conservatives keep on being duped. NR can't exactly say that.

Posted by ModeratePoli at 11:30 PM