There's a theory that the GOP movers and shakers choose the nominee, and the primaries are kabuki or smoke signals within that process. Readers of Bernstein know this as 'the party decides' thesis. It explains why the GOP nominee is squishier than the base of Limbaugh dittoheads would like: McCain in 2008 and Romney in 2012.

This year might be the year when the squishes get their comeuppance, and a real conservative (TM) wins. Right now, it looks to me as though Trump will win. His support had a few small dips, but then he surged back stronger than before. Cruz is running a fairly close second, though he's less popular outside the Bible Belt.

None of the establishment candidates (Bush, Rubio, Christie, or Kasich) is even a close third. For one of them to win, he would have to surge pretty quickly, and time is running out. Iowa is 2/1, New Hampshire is 2/9, South Carolina is 2/20, and Nevada is 2/23. Then a glut of primaries on Super Tuesday, 3/1.

But while writing this, perhaps I'm changing my mind. There may be time even after the March 1 primaries to change the overall direction. However, in the recent past, the direction was set early, before Super Tuesday. Maybe this year the contestants will be slugging it out all through March and April. That would certainly be exciting.

But if the GOP follows the usual pattern, we'll know the leader and the eventual winner by the end of February. If that's true this time, it will be one of the crazies, either Trump or Cruz. God help us. 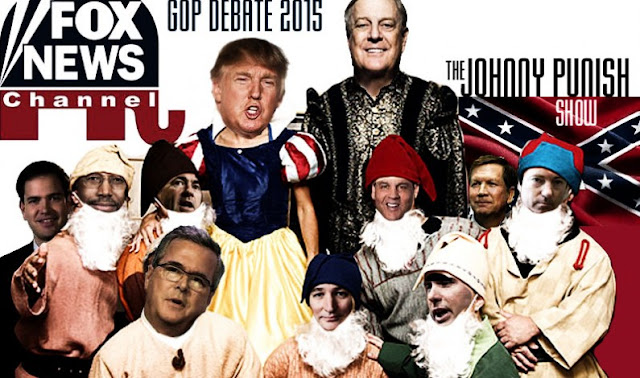 Extras. From a couple weeks ago, and feeling dated, two views on how Trump will lose. From Vox, Trump has momentum only while winning. Once he starts losing, the magic fizzles and the tantrums start. From Ross Douthat at the NY Times, the race will come down to three, and the establishment candidate will then win. Among the less sure, I'm not the only person who sees Trump as a possibility now.  Plus, another great image. 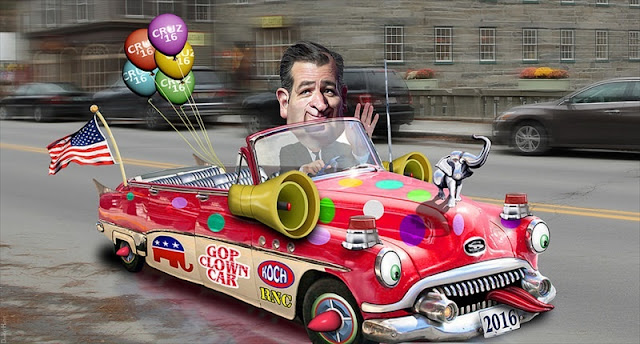 Update 3/9/16. We still don't know who the nominee will be, but the establishment candidate are bringing up the rear. The crazies are the leaders. Interesting times.
Posted by ModeratePoli at 12:08 AM

Since 2009, the GOP has set out to keep people as unhappy as possible by projecting everything in the worst possible light and directly blaming Obama and the Dems for all of it and vowing that they can and will stop it.

Then, not only did they not stop it, but things have gotten better on every front despite their certainty that THE END IS NEAR. And they convince 42% of the electorate, who HATE HATE HATE the idea of anyone with an African blood becoming the President of the United States, and their fellow countrymen voted him in not once but twice, despite the rhetoric and their perception that the country is going down the drain.

So now the ONLY people they will listen to and support are those who unabashedly reflect their hatred and certainty of their shared perception, no matter the facts. And those people can't be the same ones who earned their votes before and failed to deliver. And those people now represent the majority of the GOP by far.

Overlay these circumstances with the standard GOP approach to politics: (1) Help their friend; (2) Punish their enemies; (3) Get or stay in charge to allow (1) and (2). What they triggered with their strategy for the last 7 years are people are ONLY care about (2) and haven't a clue about what it takes to achieve (3) because they can't imagine that everyone doesn't already agree with them.

In the end, I thought the GOP would nominate Marco Rubio for their best chance to achieve (3) since the party's overall still have that as their primary objective. But the majority no longer trusts the GOP pros to make that decision and are ready to drive off the cliff with Trump or Cruz because that's the wages of anger.