Last output of crazy: Daddy, they're being mean

How can I describe the thin-skinned egotistical asshole that we currently have as president? Maybe the best thing is just to let him out himself with the bizarre things he does.

Now, an adult knows that there are ups and downs in business. An intelligent, honest, non-corrupt president knows not to interfere to help the business dealings of friends, families, donors, and supporters. But Trump isn't intelligent, honest, or free from corruption. So he tweets this when his daughter's fashion line is dropped by a major retailer: 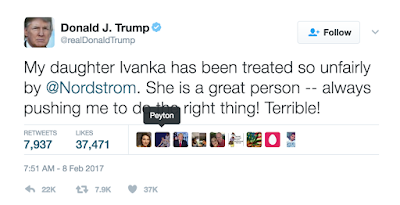 The idiocy and corruption doesn't stop with Trump, however. Kellyanne Conway told viewers to go out and buy Ivanka Trump merchandise. But it turns out (reasonably) that federal employees aren't supposed to plug commercial enterprises while on the job. That applies when the commercial enterprise is owned by the prez's dear daughter. Imagine that: you aren't even supposed to use all that power to enrich yourself and your family. Who designs these rules?

And what does the pro-Trump, fake news purveyor Breitbart do? A huge article about how the retailer is going to suffer, but how Ivanka Trump is a trooper and will just be stronger. It reads like a bad People magazine article. Barf!

So far Nordstrom's stock took a brief loss and then bounced back. A more important question is whether the asshole president will take a well-deserved hit for this. He truly doesn't seem to understand what his job is now. It sure as hell isn't promoting his businesses or his friends' businesses. A mountain of shame on him and his idiotic supporters.

Posted by ModeratePoli at 11:32 PM