I see lots of fake news from the right, less from the left. The MSM media employs a different approach to its bias. It will not report on issues (bias by omission), downplay the importance, not follow up, or latch onto a convenient explanation when they should be digging deeper. They rarely do the outright lie. When they do and they're caught, they have standard procedures: correction, apology, and if the lie was bad enough, someone gets fired. So outright lies are much more the province of the conservative media.

This is one rare article where a lazy reader could be left believing a clear lie. Start with the headline:


Did Yiannopoulos secretly send more than 100 thugs to Berkeley to break up his own speech?

(By the way, if you don't know who Milo Yiannopoulos is, it's my displeasure to tell you he enjoys being a provocateur at Breitbart who somewhat admires the alt-right and 4chan types. So, well paid scum. Also gay.)

The headline is nice use of a question to imply the incorrect info, but still allow the author to deny lying. "I am only asking a question" -- I think that was a standard line of Glenn Beck as he drew his infamous charts showing the evil machinations of whomever.

Then I had to scroll down through the equivalent of about five screens before the author casts doubt on this speculation. Up till that point, it's a description of what's known about the event that supports this conspiratorial speculation.

However, this article is generally better than the conservative media because the impression is corrected if you read far enough down. So, it's not like the rest of the fake news I complain about, like Clinton going to Pedophile Island and lies like that.

So even when I see something that looks like fake news in the MSM, it isn't. Conservative media still has a near monopoly of this particularly form of despicable behavior. 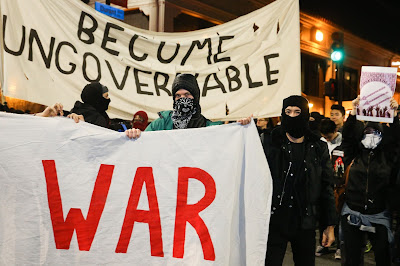 Extra. More reporting on the campus police's weak response to the rioting. Compare these two responses to the riots.

Update 8/29/19. A MSNBC host rushed a poorly-source scoop (about backing of loans to Trump) onto the air. A day later, he's apologizing, correcting, and explaining what he did wrong. Funny, but Fox News doesn't behave this way when they muck up their reporting... cough ... Seth Rich... cough ... MI6 bugging Trump Tower.

Posted by ModeratePoli at 2:45 PM