Links about 'Repeal and Replace'

For seven years the GOP bragged that they could make a better health insurance program than Obamacare. For seven years, they waved their hands, gave us bullets points sprinkled with pixie dust, and didn't deliver.

After winning the presidency, and already having majorities in the House and Senate, the GOP was supposed to be poised to repeal Obamacare on the first day of President Trump's term. Somehow, that didn't happen. BECAUSE REALITY IS A BITCH!

The GOP can't wave their hands anymore and fling pixie dust. They have to seriously crunch numbers, and it hasn't been going well for them. They can drop coverage for millions of people, they can zap the mandate and see cost rise even higher, they can repeal the taxes and blow up the deficit. What they can't do is figure out how to make a program cover more people and cost less. I wonder why not. Maybe not enough pixie dust. 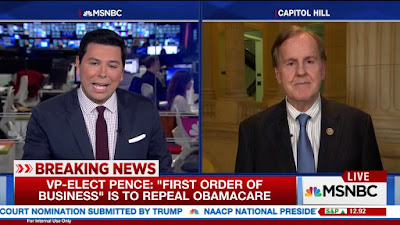 Extras. Problems with repeal and replace (with less snark). True believers among Congress just don't understand the delay. Trump makes another promise about the replacement, sprinkled with prodigious amounts of manure-scented pixie dust.
Posted by ModeratePoli at 10:21 PM

Actuarial facts are facts. People can BS about a lot but when it comes to money, it talks and the BS walks. Not even the alt-anything can escape that truth.

Healthcare is costly, virtually certain over any risk-calculation period, and an ultra-high priority. Those are the actuarial facts. The other facts are that most people don't have the money to pay the professional to provide anything more than basic care, many don't even have money for that, but everyone wants it anyway. The third and incontrovertible fact is that lack of compassion for the sick is a political loser.

Put those facts together and there's no choice but to tax the bejesus out of the wealthy to pay everybody's healthcare. But taxing people -- even the wealthy and for the Rs in particular the very wealthy -- is also a political loser. So it comes down to messaging and sleight-of-hand to hide the lack of compassion and or taxing people. Pick your poison.

The Rs were simply better at the messaging, making it look bad that the very reasonable idea of everyone who can afford to paying in whether they thought they needed insurance or not, while mostly just despising that their wealthy benefactors had to pay more toward poor people's healthcare. And the Ds didn't have a comfortable description of what they were doing (the Rs' original healthcare plan) with a D label.

If only if only if only the Ds had portrayed Obamacare as what it was -- turning health insurance into a public utility -- they would have won the messaging battle and the Rs wouldn't even think of trying to undo it. Just think of that. If people thought of health insurance like they do electrical service, all of the R replacement proposals seem like what they are: excuses for rich people to cut their taxes.

Personally, I hope the Rs suffocate gas and suffocate on their repeal/replace plans.