I've read so many people claim that it was just terrible how the MSM favored Clinton, and flagrantly colluded with her campaign.

I'm not naive enough to claim that the MSM is fair and unbiased. I frequently see a liberal bias there. But I wondered about charges of collusion, with journalists breaking ethical rules to help Clinton. The only example I heard about before the election was Donna Brazile providing Hillary with a heads-up on one question at one campaign event. Yes, it was unethical, but there's no way it was a huge deal and a huge advantage.

So how bad was all the other collusion? Did it amount to an unfair advantage?

It lists nine incidents, including the leak of the question. It includes of couple of instances when a reporter emailed ad ideas to the campaign or its advertising agency.

Really, all of NINE instances.

If we're going to talk about unethical and biased behavior by the media, let's talk about what really happens on practically a daily basis. Let's not pretend a list that doesn't even reach a couple dozen cases makes an ant's worth of difference compared to the daily skewed news of hundreds of media outlets. 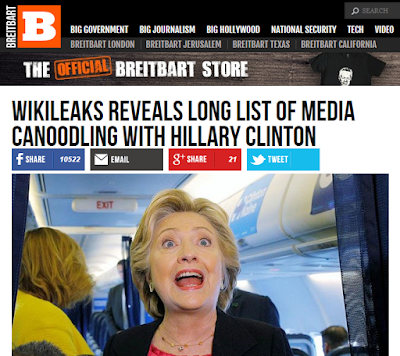 Extras. Here's a list of damaging info about the DNC related to Bernie Sanders. It may be a partial list because document dumps were ongoing. Again, mostly small stuff, nothing like stuffing the ballot box, buying votes, or violently assaulting opponents.
Posted by ModeratePoli at 11:16 PM

As if A-student Hillary need any help in advance of a debate in the primary. What BS.

Media bias is always toward a good story, readers, and money. Secondarily, they like to get to truth if it serve those other masters. Media cozies up to all newsmakers, and there are natural friendships or bonds that form. Since Trump was such a dumpster fire of lies and deceit, and the media doesn't like that, it's natural they would prefer Hillary wonkism everything else being equal. So I'd don't take any soft and judgment based charges of "bias" seriously, particularly from the Right.

If anything, media was biased toward Trump because he made a good story whether he was going up or down. So he got coverage and people started to take him seriously despite the constant stream of lies and insults.

The real bias was the media's failure to report, at least as analysis, the obvious conclusion that Trump was hiding his illegal activities behind his opaque business deals as the true reason he wouldn't release his tax returns. Instead, they gave him the benefit of the doubt assuming he would lose anyway and why face the charge of media bias from the Right if he isn't going to win anyway?

So instead we have a wholly corrupt, lying narcissistic conman as president. Talk about miscalculations!