I have too many links to do justice to each of them, so I'll just blast out a post and save them for posterity.

The obligation to listen. Great story by Andrew Sullivan reminding us that we need to consider all opinions. Each opinion tells us something important. I firmly believe it's wrong to summarily dismiss the heartfelt beliefs of other people.

Not repealed yet. In March it looked like the GOP wouldn't figure out how to compromise and pass a replacement for Obamacare. This article reminds us that the Senate still has to work on it. I think they will get it done, and I suspect it will follow the House model.

Fired by Trump. Lawfare is an excellent resource. One article on Sally Yates testimony about warning about Michael Flynn. Two companion articles about the relationship of Trump and the fired FBI director James Comey. One from the New York Times, the other from Lawfare. The Times article is the easier read.

Oh, the irony of Trump calling anyone else a 'nutjob.' Even more irony that he's saying it to visiting Russian ministers. It's amazing that Trump believed he could make the Russia investigation go away. What a fool he is.

Report on Russian hacking. I'll be reading the unclassified version of the report about the Russians hacking the DNC. It's on my list and pinned to my browser tab. I'll get to it, I promise.

Questionable intelligence. I'm not sure I believe this claim: "We just got a huge sign that the US intelligence community believes the Trump dossier." Saving it just in case it's true. I'm still very dubious.

Russian Good Times. Finally, I just have to laugh about the Russian Times complaining about the journalism of anyone else. I'm saving a closer read for later, but I just had to check if there is a comments section. Yes, there is, and what a window into hell it is. I'm sharing it below. 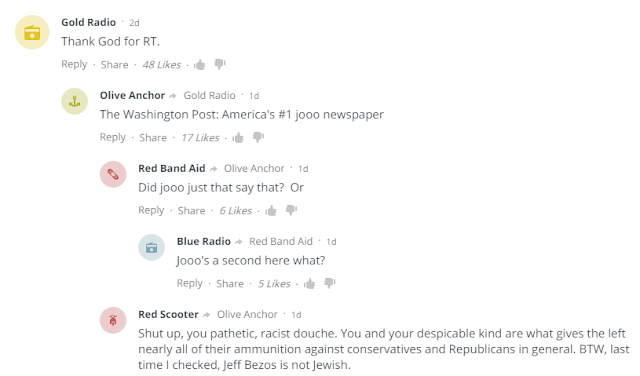 Posted by ModeratePoli at 2:50 PM

"Cover-up and obfuscation seem to be the go-to strategies of politicians -- see Hillary and her email server."

This is the biggest repeated lie related to Hillary's email server and the fundamental failure of her defense.

There was no "obfuscation" on the e-mail server. Thousands of emails from Hillary and others on her staff went out to hundreds of people all over the place with the domain attached "clintonemail.com", not "state.us.gov". So the server's existence and a screaming declaration it was separate from her official Secretary of State email address and server. That's hardly keeping it secret or obfuscating.

The only thing that made it seem salacious and secretive was that the server was maintained in her Secret Service secured residence, as opposed to a commercial service provider somewhere. Plenty of business have their own email servers in their offices or computer rooms. But it could be spun as something nefarious because it was in the basement of her home.

That doesn't make it secret. At most, nobody cared enough to ask at the time, and when the Rs finally decided to use it to batter her, they retroactively made it seem wrong.

Not making it clear that it was never a secret email server and plenty of people knew about it was Hillary's and her staff's failure. The countercharge should have been naked politics for a routine business function and routine communications.

As to your likely reply about "classified" documents, her assertion that none of the documents were marked classified at the time is a strong defense. Other agencies may have classified information that was in non-marked emails, but it's not fair to assert a failure on the part of Clinton or her staff from knowing some other department classified the information. This was Comey's failure. He allowed a falsehood about both the nature of the "classified" information contained in the email, and a valid comparison of anyone else's non-classified emails containing classified information unbeknownst to the sending or receiving parties. That is, just because some labels something classified, unless they tell everyone else to classify the same information, they can't be charged with distributing it.

None of that matters in politics, of course, but to blandly say Clinton obfuscated on the email server when they gave everyone in her circle a rectal exam about it is nonsense.