The background: In a fit of pique (and a bit a planning), Trump fired the director of the FBI, who also happened to be directing the investigation of Russian interference in the 2016 election, and whether Trump officials had any connections to that. And, of course, investigations into lies, cover-ups etc.

There was a general sense of relief (I thought) at the naming of a special counsel, especially because he had such a good reputation. Robert Mueller had been director of the FBI, and was very respected on a bipartisan basis. He had been appointed by BushII, and his term was extended by Obama because it was so hard to find a good replacement.

So he was lauded when appointed. But that couldn't last because in Washington everyone is a target. Even Jesus Christ would be pilloried if his job was to investigate Trump. So the game was soon on to bash Mueller. They really don't have much. He's a good friend of Comey, the fired FBI director. That's a problem, but maybe a smaller problem than finding a better person to lead this investigation. Then there were charges that he's hired too many Dems, and they've given too much money to Democratic candidates.

It's interesting to note that critics have very little to complain about, so they complain about the scraps they have. There doesn't seem to be a lot of leaking, no malfeasance on the part of investigators, no one in the investigation shooting their mouths off or firing off inadvisable tweets. I'm no expert on investigations, so I can't say this one is solid. However, it's clearly disciplined.

It was instructive to me to go back and review what was said about Mueller when he was first appointed:


Mueller has a strong reputation for independence, and comes with the right credentials for this job. - Senator Grassley

[T]he media can sniff, but Mueller is a consummate professional, which is why two presidents appointed him FBI Director. - Former official from Reagan, BushI and BushII administrations.

If Trump is clean, this could be good For him... Mueller is reportedly an expert at keeping his mouth shut, so that means lots of radio silence here. - Ben Shapiro, conservative columnist

Bob will be known as the most transformative director in the history of the FBI since Hoover. And I mean that in a good way. - Michael Chertoff, former Secretary of Homeland Security

I don't particularly remember Mueller's tenure at the FBI. I suppose it was solid and without a huge scandal. I do recall the commendations heaped on him for taking on the investigation. No one said he was a terrible choice. Complaints started as it became useful for Trump partisans to cast doubt, butI have no reason to buy into that narrative. Instead, I'm very much looking forward to the report on his findings. I hope it will be detailed, comprehensive, accurate, and fair. I hadn't seen anyone else that I would trust more with the task. 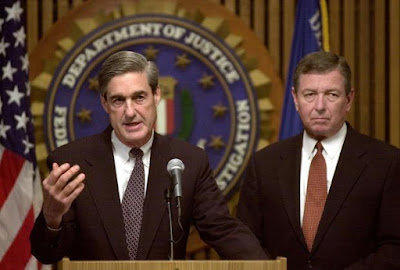 Update 12/28/17. In an interview with the New York Times (and re-reported elsewhere), Trump said Mueller is 'going to be fair." Trump must be listening to some sources other than the 'Mueller is biased' crowd. Folks like Trump's lawyers probably know that he shouldn't be lathered up against Mueller, but calmed down instead. Trump's base, however, is ministered to by people who care about ratings and clicks, so their incentives are different.

Posted by ModeratePoli at 1:44 AM