I'm late writing about this story, but that's OK because the themes of the story are timeless. (I'm also going to be more free-form in writing.)

Roy Moore is a former judge in Alabama who displays a lot of the worst characteristics of evangelicals. He thinks God is on his side. He thinks he's right and anyone who agrees with him is wrong. His beliefs are more important than American law. He thinks he's right when he defies court rulings, laws, whatever. He's been removed from the Alabama Supreme Court twice (TWICE!) for this kind of behavior. The first was for refusing to remove a stone statue depicting the Ten Commandments. (The order was due to that whole 'separation of church and state' nonsense.) The second time was for lying about his directions on how to handle (errr, avoid) marriage for same sex couples, which the US Supreme Court approved a few years ago.

So, although he was controversial, he ended up as the GOP nominee for Senate for a special election in Alabama to replace Jeff Sessions, who left the Senate to become Attorney General. This shows yet again that too few regular people vote in primaries. People shouldn't be so lazy because primaries are important for getting the best possible person in the office.

The GOP had the main primary and then a run-off between the top two. Only after this process were there national reports alleging that Roy Moore had chased, bothered, and even molested at least one 14-year-old girl when he was single, a prosecutor, and in his 30's.

This isn't news to me. I hadn't heard it about Roy Moore, but I've heard it before and even witnessed it with my own eyes. There are too many men who take liberties with women as though men have prerogatives and women must simply comply and supply. So I'm not disposed to believe a man's denials. But beyond my own bias, the preponderance of the evidence is against Roy Moore and with his accusers. There is a pattern, plus there are plenty of people confirming that he gave unwanted attention to teenage girls. There's even a video of a male worker at a store in the mall talking about Moore being banned from the mall, including the name of the police officer to contact if Moore came around. This isn't a guy with an ax to grind, so his story is very credible and very damaging to Moore. The denials are Moore and his friends circling the wagons. Again, this is typical entitled male response (actually, circling the wagons is typical of many groups).

Moore, just as one might expect from a self-righteous person, denies the reports and calls his accusers liars. What is much more likely is that Moore is an abject liar himself.

Only one Republican that I can point to has acted honorably, and that's Senator Richard Shelby. He clearly said that Roy Moore isn't a good candidate, that he wasn't going to vote for him, and that Alabamians shouldn't vote for him. Most other GOPers were weasels about Roy Moore.

The good news is that Roy Moore lost. That's a good reflection on the majority in Alabama, and what a pleasant surprise to give the rest of the country. The Dems were very happy because there hasn't been a Dem senator from Alabama in 20 years. The Republicans aren't completely upset because Roy Moore is a loose cannon that they won't have to worry about, so a bit of relief for them. 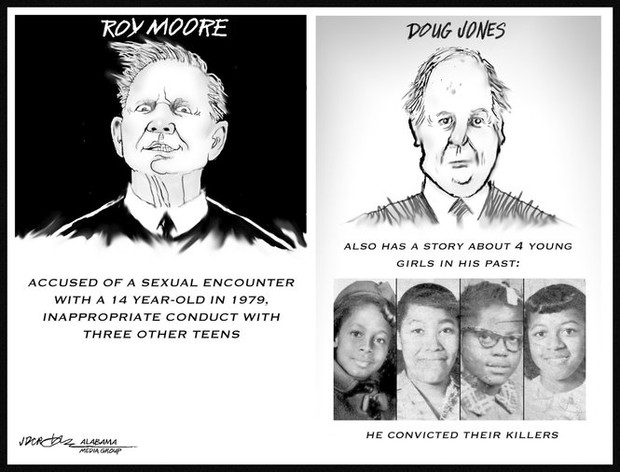 Extras. Lots. Breitbart lies about the inscription in a yearbook. It was clearly a combination of different writers, so this isn't a revelation... to anyone with a working brain. Breitbart then whines about being labeled liars. Another woman shows a greeting card from Roy Moore, who dated her when she was 17. Check out the handwriting.

Fox News interview with a pretty fair analyst. The anchor is trying to skew things, and it's interesting how the info about Sen. Shelby is buried at the end. Probably no accident. Roy Moore never conceded the election (because he's God's choice, you know) and even tried to prevent the certification of the election. He wasn't successful because there is a reality beyond Moore's belief systems. Thank God for that.

Posted by ModeratePoli at 4:52 PM