May links: cleaning up from April

Korean peace? Don't be too hopeful yet. North Korea has pattern of reneging, or getting stubborn.

Trump's fixer. Michael Cohen, who handled a payment and non-disclosure agreement for a paramour of Trump, also worked for Sean Hannity. It might be involve real estate, but maybe it's another fix-it situation. Time will tell, and I'm not convinced it is just real estate.

Parties and race. This article chronicles how the Dems signed up with blacks long before the 60's. Contrast this bravery with the craven behavior of most Repubs. Also from Vox: White evangelicals tolerate racism and character flaws in Trump. An explanation about Kanye West and Trump.

Forge and frame, inc. Software now makes it possible to fake someone's words and facial expressions in a video. What a bonanza for computer-capable liars and fake news generators.

What competence looks like. Saving all but one person when a jet engine falls apart, piercing the plane in the passenger compartment. The dive to lower atmosphere for more oxygen, the successful landing. Even calming the passengers. Thank you from the bottom of my heart.

No effect from the weakening dollar. The dollar has been getting weaker, so are we exporting more? Not really. Good explainer for why.

Russia-related stories: McCabe's wrongdoing at the FBI. I want to hold on to this resource about the Inspector General's report and see what happens. Was he conniving? Was he thrown under the bus? Also this article. Comey notes about Trump. His private memos, written to document the weirdness of Trump's communications with him, are now public. Who's the liar? Trump's legal team. Trump has hired Guiliani for his Russia strategy team. Another Russian tactic. (I almost , typed 'Soviet.') Use international committees to harass emigres in other countries. And to think that my favorite shills think that Russia is good and the US is a war-mongering horror. Russian meddling. A link to the House Intelligence report. A real report, not a Nunes tissue of lies. 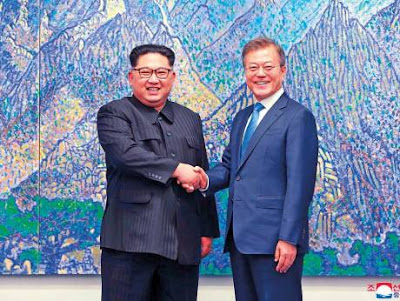 Posted by ModeratePoli at 10:17 PM

I'm a little suspicious of North Korea's newfound cooperation. Could they be buying time for something else?