The state intervenes... too much

The Alfie Evans scandal didn't get a lot of news site attention from the MSM, but it did in the conservative media. A bit of background if you don't know the story (which means that you follow the MSM and thus miss some news stories):

Alfie was born in Britain about 23 months ago. About 6 months after his birth, his health was declining and he was found to have some unknown wasting disease that was shrinking his brain. He's been on life-support since December 2016. The doctors decided treatment was futile, and removed life support. A hospital in Italy offered to take him, which the parents wanted, but this was blocked by the British courts, who also posted guards to prevent his parents from removing him from the hospital. He died at the hospital on 4/28/18 approximately 5 days after being removed from a ventilator.

Initially I viewed this case of one of people blindly holding on to hope, screaming for everything possible to be done, and ignoring the evidence that it was hopeless. I think most of the news stories played out this way, along with most of the comments. So my initial reaction was to back up the scientific findings and stress the reality of the situation. Alfie was not going to recover. He was not conscious at all, and would never become conscious. He had no prospect in life except being connected to life support and having seizures as they gave him therapy in trying to keep him alive. That was the hard truth that so many people seemed unable to accept.

I agreed that hospital was right to declare treatment futile. I disagreed with the British court preventing the parents from taking Alfie to Italy. There seemed (to me) little chance of significant harm to Alfie. But the judge was overly concerned that he'd die in transit, and that seemed appalling to the judge. I disagree, but at least I understood the rationale, and I didn't think the judge was a monster. Many others did.

The public outrage at the hospital and the British courts was huge, which I didn't understand. Now I do.


When should courts overrule parents?

If you look at the story through the lens of what was good for Alfie and what was medically possible, the parents seem out of touch, and the hospital and courts seem sane, realistic, and reasonably kind.

However, if you look at the story through the eyes of Alfie's parents, it appears very different. They want to do whatever they can for their son. The hospital says they can't do anymore. The parents are distraught, seek other opinions, but are legally and physically blocked from taking their son to another location for treatment.

This is the outrage. They love their son, want to care for him, have never been abusive to him, but their rights as parents were shut down in favor of the court's opinion. I felt this was wrong, but at first I didn't feel the outrage of it.

The mistake of the court was to take away the rights of the parents to decide the child's treatment. Almost all parents will consider carefully, help, nurture, notice how the child responds, comfort, and minimize suffering. Most parents can do this better than a judge can because they are intimately connected to the child.

Not all parents are like this, however. Some are abusive or negligent. For those parents, it makes sense for the courts to intervene. However, Alfie's parents were neither abusive nor negligent. They cared more than anyone else. But at the end, these parents, who dearly loved him, were barred by police from caring for their son in the way they desperately hoped to.

That was the wrong. Not against Alfie, but against his parents. And it was a fairly grievous wrong, to take the decision away from them in such desperate circumstances.

Media tended to focus on how it wasn't certain what caused Alfie's decline, and how his last hope relied on getting care elsewhere. Some attacked the British National Health Service (NHS) for its policy to withdraw life support. Some didn't attack the NHS, but faulted the courts for siding with the NHS against the parents and the child's 'last hope.' It became a cause within Britain, but perhaps even more among American conservatives. Their spin, motivated by animus against socialized medicine such as the NHS, regularly contained lies and didn't accurately report the reality of Alfie's condition. The media regularly used words like 'murder' and conservative commenters copied that. Very few gave consideration to the personal, ethical, moral, and financial issues in giving life support for extended periods.

The American Conservative is typically a more thoughtful source of the conservative perspective. But even here, Dreher puts his thumb on the scale. When the NHS wants to end artificial life support, it's described as "forcibly euthanizing the disabled." But should his parents make the decision, it's letting "Alfie die a natural death." Interesting difference in wording considering the actions are the same.

The American Spectator is probably more typical in its invective. The doctors are incompetent and the state is tyrannical. This isn't measured analysis, it's war against tyranny. It's no wonder so many echo these arguments when they're not presented with any counterarguments. Just one side of the story. If you're not practiced in questioning, it's not going to happen.

Luckily, the comments section for the Dreher argument had other thoughtful alternatives. Another columnist for the American Conservative focused more on the parents, and was also fair to the doctors. In the comments section for the American Spectator, anyone dissenting was blasted. Well, that's just another week in the culture war. I wonder what this week will bring? 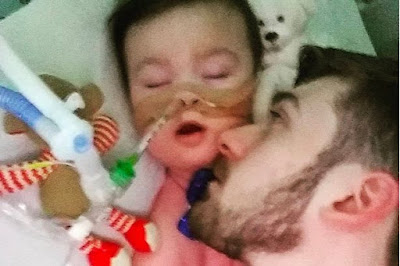 Alfie on a ventilator, with his dad
Image: dailyrecord.co.uk

Posted by ModeratePoli at 8:51 PM