I was away for the month of March with only a tablet, and not in the mood for typing on that infernal non-keyboard. I did read a few interesting items, and a few more since I returned home.

Closing the racial achievement gap. According to Charles Murray, this should be impossible because it's inherent in the genomes. An intensive program in New York City has had very good results. However, skimming the published scientific paper, it's not clear that the gap was erased, just that they were heading that way.

North Carolina's blatantly discriminatory voting act. Struck down, but uggghhhh! This couldn't happen in the Supreme Court hadn't decided that the Voting Right Act was no longer needed. Well, that was a partisan decision, not an honest judicial finding. I read elsewhere that the legislation disallowed the types of IDs that were more common among blacks. Yes, very blatant.

Voter fraud investigation in California. I wonder a lot about California, partly because I nearly became a voter there but bailed out before I committed an actual illegal act. This investigation may be ongoing, but hasn't turn up much. However, I like to watch whatever I can in CA.

Korean strategies. From March. This story is a bit slow, but still an easy read and fairly informative on different ways to view the situation in Korea.

Nazi story. A profile of a leader of a white supremacy group that was involved in Charlottesville.

Unexpected interference in business. Suppose the socialism wasn't the worst enemy of business. Instead, it was a thin-skinned blowhard who ended up as president.

Capsule picture of what's wrong with Trump. This story rings so true to me. Trump as an impetuous glad-hander who doesn't know what he's doing.

Iran's presence in Syria. Very informative story about why Israel is bombing airfields in Syria, and who has missiles where. 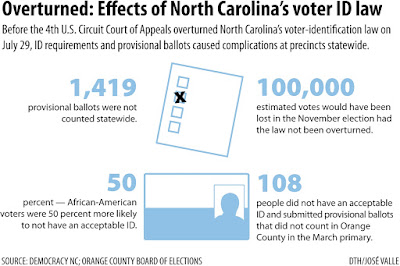 Posted by ModeratePoli at 11:24 PM