It sucks that I'm still writing about Benghazi. It sucks that the issues surrounding Benghazi haven't been settled. It sucks that information about  Benghazi hasn't been thoroughly thrashed and set to rest. It's a living demonstration of the partisanship that there hasn't been a clear, concise, thorough, and uncontested report of what happened. It reflects on secrecy and cover-your-ass dissembling by the Obama administration and partisan point-scoring, innuendo, and hyperbole by the GOP.

This latest bout of Benghazi research was prompted by a comment on the stand-down order. Politifact says that the story of a stand-down order is mostly false. It pointed to a report of a House Intelligence Committee, and I decided to read it. It's actually pretty readable, less than 30 pages, and doesn't get bogged down. It seems to be mostly a fact-finding mission--the kind of report I've wanted to see.

From my own research during the summer of 2014, I figured that the stand-down story had some major holes in it, primarily that it was simply a 20-minute delay, not a stand-down. But there's not enough drama with a delay, so the story was juiced up.

The report confirmed what I had suspected (win for me!). There was a delay as the station chief tried to gather more info and more support, but it was a minimal delay, per pages 19-21 of the report.

However, drama sells. Partisan audiences are hungry for scandal that fits their biases. So we get books and even a movie based less on evidence and more for giving the crowd what it wants. Trey Gowdy (GOP representative) is too cowardly to tell the whole truth either:


"The best I can do is tell you what the witnesses say, and then you can decide who you think is more credible."

Let me translate that:


'I don't think the story is credible, but I'll cling to the thin thread of evidence because it's politically expedient.'

He does admit that leaving earlier wouldn't have saved the lives of the two diplomats who died in the compound. I'll be remembering this to refute the yahoos who repeat that specious claim.

But back to the report. It was good to find out about roadblocks, and how the team that flew in from Tripoli was stuck at the Benghazi airport until they found one local group that seemed trustworthy enough. The attack on the CIA annex was unusually precise and coordinated, and deadly, with two more Americans killed there. Then everyone evacuated to the airport, along with the body of the ambassador who had been missing. That mystery was resolved in less than 10 hours, even in dangerous territory like Benghazi.

Some GOPers wouldn't sign on to the report. I guess it blew up too many of the talking points they wanted to clutch. Gowdy was one of those who refused. That guy--sometime he goes up in my estimation, and sometimes he scrapes the bottom.

One final sentiment: it was worth my time to research this and find what seems to me like the actual truths. Truth is worth the effort. 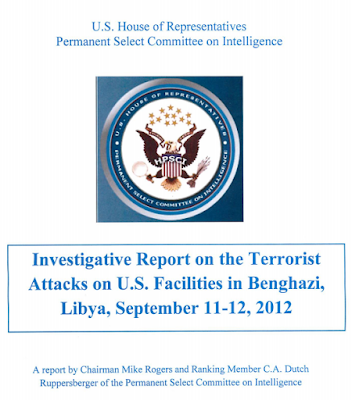 Extras.  National Review declares there's evidence for the stand-down order... and neglects the evidence that refutes it. Convenient omissions? From WaPo: Who is more credible--the Benghazi CIA station chief, or the author of the sensationalist book?

Posted by ModeratePoli at 5:25 PM