Double header!! First up is an article from WaPo detailing how Fox News distorted one news story from January 2018. The New York Times reported that Trump had told the White House counsel (McGahn) to have Mueller fired. The rumor that Trump wanted to fire him was going around like crazy, largely because Trump regularly fed the impression. Also Trump was known for firing people, including the head of the FBI, his chief of staff, communications director, and assorted others. Oh yes, he fired people on his reality show too.

But the NYT doesn't report the odd rumor, and it had details. Fox, however, exists in a separate universe and doesn't believe the stinking NYT, even though they have a much better track record for accuracy.

Trump claimed it was fake news. Hannity repeated that. Then Hannity had to back down as actual news operations at Fox confirmed the report. Then spin took over. Trump has the right... This was six months ago... Who cares anyway. Immigration is more important...

The Mueller report confirmed this, by the way. Eye roll for Fox News.

Fox News, as the defender of the Almighty, Protector of the Faith, etc. had an article on an official letter from the White House counsel complaining about the Mueller report. This was perhaps counterprogramming against a letter from Mueller leaked on 4/30/19 where Mueller complains that summaries of his report are inaccurate so the summaries he wrote himself should be released. (They were leaked.)

The letter from the White House counsel complains that Mueller didn't draw conclusions, and he should have. However, the arguments there completely ignore what the rationale that Mueller plainly gave in his report, which was that DOJ policy didn't allow him to make an indictment against the president, so he was doing what he could legally and ethically do considering those restriction. Mueller cites OLC in the first page of Volume II, concerning obstruction of justice inquiries. The White House counsel just ignores that. Plus it veers into an addition Trump probably requested complaining about leaks and claiming Trump is the highest official in the country so blah blah blah he gets to decide everything within the executive branch -- as though conflict-of-interest doesn't happen.

This isn't exactly a legal clown car because there is some coherence. However, it doesn't touch on the most important points, so the goal of the letter seems to be to blow smoke. Sad. 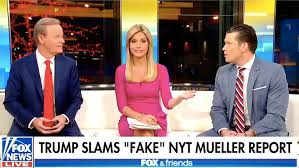 ... but it was true.
Image: thedailybeast.com

Posted by ModeratePoli at 11:23 PM