"Gay marriage advocates are not advocating equal access to civil marriage as it has been historically defined by statute, they are advocating the creation of a parallel institution of gay marriage." - Atlantic comment

My impression is that this comment is wrong, and that, in fact, few changes are needed to permit same sex marriage. But rather than assuming this was true, I wanted to check by looking at the Maryland law that passed on 2/23/12.

The total bill (House Bill 438) is 6 pages long. Reading every word was tedious but not time-consuming.


Relatives You Cannot Marry
The first 1.5 pages are a summary and some boilerplate. The next 3 pages are double-spaced changes to the existing law. For example, the law no longer says:


A man may not marry his:

Exemption Clauses
The next page contains the guarantees that religious organization do not have to perform or otherwise support such weddings and have a religious exemption from providing insurance benefits. The final half page postpones the effective date of the legislation to allow a referendum on the issue this year if enough signatures are collected.

So I'm calling bullshit on the claim of a parallel institution. It's the same institution. 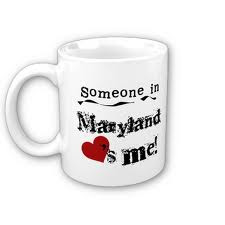 
(1) The Department of Health and Mental Hygiene shall provide to each clerk:
(i) birth control information; and
(ii) a list of the family planning clinics located in the county where the license is issued.

Update 2/25/12. I should have done a better job of analyzing the claim that "gay marriage advocates" want a parallel institution. It's a pretty fake argument, since many gay men and lesbians have said that they don't want to settle for a second-class, separate-but-equal arrangement.

No, it's the traditionalists who might want that:
So it is people who are against same-sex marriage who want the parallel institution. Why would they want a separate institution? Because it is an abomination that people participating in those kinds of sex acts should want to be married or should be considered married. It's a vile misuse and destruction of the sacred rite of marriage.

This is my analysis of the anti-gay-marriage position. I hope I haven't misrepresented this position, which is easy to do since I disagree so strenuously. Here are some recent opinions gathered from the web:


"The practice of homosexuality is an abomination according to God's word. Gay marriage a matter of fairness? I don't think so! It is wrong because God's word says it is wrong. That includes the New Testament's Romans 1:23-32 which says that man on man sex and woman on woman sex is wrong. We can't vote in something that goes against God's word and expect His favor on this nation. . . Martin O'Malley and his wife are willing to overlook God's word in their support of this abomination which is an insult to a God who has given them much in this life. . . You know what happens to people who do that? Have you met any Amorites or Jebusites lately?" -- Letter to the Baltimore Sun, 2/3/12

"People that are gay, know in their heart of hearts, that what they are doing is not right, Just like a majority of people know that having sex with their parent or child is unacceptable. They are forcing the majority of us to accept their immoral behavior to assuage the [their] feelings of guilt and that what they are doing is okay because it is for “love” When I see those hypocrite “Priests or Rabbis” performing those so called “marriage ceremonies” , it is sickening as in those religions, it clearly says it is immoral and an abomination to g-d." -- Comment on CBS NewYork, 7/25/11

Of course, it's easy to find these kinds of statement when you use the terms 'sacred rite of marriage gay abomination' in a Google search. Maybe I've constructed a straw man, but I don't think so. I think this truly represents what a large number of gay marriage opponents think. 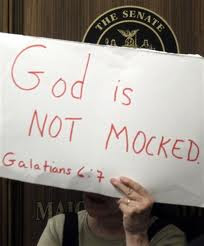 Posted by ModeratePoli at 9:24 PM

Even though I'm a religious person, I'm not impressed with the "God's law" argument against gay marriage.
First, whether homosexuality is wrong depends upon whose version of scripture one cites. The medieval Roman Catholic and Eastern Orthodox Churches sanctioned and blessed "brotherhood" relationships. One non-canonical gospel even attributes what could be construed a gay relationship to Jesus.
Second, a lot of things that are "immoral" according to the Bible are actually protected by the US Constitution. Such as idolatry (freedom of religion); blasphemy (freedom of speech); and violation of the Sabbath (free trade). It doesn't look like the Almighty is in any hurry to zap the US for violating those commandments.