Good news from the GOP, Part 1

So while I was writing that the GOP was pretty quiet about their debt ceiling strategy, they were in Virginia discussing and changing that very strategy. I won't spend a lot of time discussing the new offer, but it's roughly this:
That plan doesn't sound like much, but it's still quite a step forward for the GOP. For one thing, they recognized that they had a problem many weeks before breaching the debt ceiling.

The problem: They had no rationale for holding up a debt ceiling increase because they had no alternative plan on the table. So far, their new strategy is about as thin as it was before. The president will have to present his budget, which has almost no chance of passing, and then... Well, that's where the current non-plan looks like the previous non-plan.

So it's best for them to punt for a few months and build a strategy that they can present. Nonetheless, the Republicans have recognized the problem and seem to be working seriously on it. That's usually the hardest step. I'll be watching for them to deploy the rest of their new strategy. 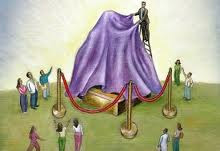 Extras. And here are some suggestions for the GOP from its own camp:

Preview of Part 2 -- I'm not completely sure. More ideas are percolating, some of which have already been written, edited out, and are likely to be tossed. But it was important to me to post about this significant development before it got any later.

Posted by ModeratePoli at 12:38 PM

MP - I think the plan is to play smaller ball somewhat, in that they want to shift from credit default as the bogyman to .gov shutdown as the worst possible outcome. To do that, the realign the fights that come up to push the debt limit out past the CR and sequester.

@truth,
I think the change is bigger than just which "crisis" to use as leverage. I agree that the budget, sequester, or CR is a better choice, but it doesn't change the fight in itself. See my next post for other changes I'm expecting.

I agree it doesn't change the fight or actual stakes at all; it only changes the optics and the nasty things each side can say about the other - mostly the Ds to the Rs, on that.