The temptation to blow up government

The talk (or blather) from the Tea Party crowd is that the Republicans in the House and Senate should shut down the budget process unless they get much more of what they want. For the purposes of this post, I'll ignore that they don't have a realistic budget proposal, much less a compromise proposal, so no real proposal at all. They still want that magic something, and some are agitating for a "Let's show 'em" stance. They are tired of the GOP folding, and they want to push hard enough to see whether the Dems will fold next time.

What will this strategy bring? Here are my predictions for the likely outcomes:

Sometimes I think that most people with their eyes open already know this, including most people in government. That's why they aren't working on reform plans for Social Security, Medicare, or the tax code. It would just be wasted effort.

However, there is the noisy rump of the Republican Party that still thinks they can have their way despite the outcome of the most recent election. Now, what I can't explain is why they cling to that belief. I can speculate, though. They live in very conservative areas where their views aren't questioned, and therefore they wrongly feel that they are in the majority. The news media they listen to (talk radio, Fox News) reinforces this view of superior numbers by neglecting to point out evidence of the larger political world. But there's no stopping reality, their delusions not withstanding.

I wonder how many years the delusion can endure? On this question, I'm not making a prediction, but I welcome the predictions of others. 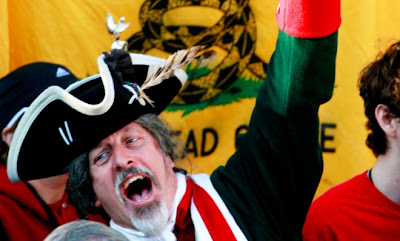 
Extras. The hero worship of Ted Cruz. RedState's Erickson tells the GOP to be tough, just like they [weren't] on tax increases.
Posted by ModeratePoli at 11:04 PM

You're saying that you think the delusion will last until Texas turns blue? That's great as a quip, but I think the GOP in this country will be defunct if they allow Texas to go blue. I see change in the GOP before extinction. But I appreciate the prediction and/or pithy joke.

It will take an electoral drubbing so that being associated with Teabagger nonsense is so obviously damaging that whatever influence they current have is obliterated.