More character assassination from the GOP

I'm surprised that's there's room for this president to become more lawless, considering that some opponents said back in 2009 that he was going to create his own private army.

Meanwhile, the rest of us sit back and yawn. Frankly, I don't know if Obama has acted more frequently beyond the scope of his powers or not. I do know that Congress has been more recalcitrant that ever in voting on his nominations, so I can't get too anxious about a few possibly illegal recess appointments as a huge affront to the Constitution and limits on executive power. After all, it's not like a few top level bureaucrats are equivalent to commissioning an actual private army.

The clearest overstepping of his powers occurred when Obama used military forces to aid the Libyan rebels. Congress gave no authorization at all--not because they were dead-set against the idea but because they were in a particular pissy mood and wouldn't vote for anything Obama wanted.  So rather than see the rebels languish, Obama ordered the military support in contravention of the War Powers Act. Congress may have been bratty enough to deny him authorization, but they weren't stupid enough to bring him up for impeachment when they were the ones who were acting like children.

If Congress, or particularly the House, won't start impeachment hearings against Obama over large scale use of military forces without authorization, then they probably won't do it over his new savings plan--that incredible bit of lawlessness.

But why do the conservatives start these new charges at regular intervals? Is it like the fashion industry where creating new styles drives sales which keeps the industry afloat? Are they truly oblivious to the effect on the rest of the country who are sick of this hype? Those are questions I love to force some conservatives to answer, preferably at gunpoint.

On second thought, this meme may shrivel within the week. The folks at HotAir care much more that Paul Ryan is trying to sneak in immigration reform than about yet more powers Obama is abusing. You just can't trust anyone. 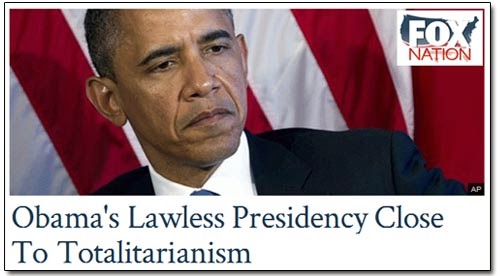 Posted by ModeratePoli at 5:23 PM

BTW -- Paul Ryan, the supposedly sensible and serious GOP leader, picked up and advanced this talking point. Ironic that when Bush allowed (ordered?) torture -- which is clearly lawless -- I don't recall hearing a peep out of Ryan or any of them.