Let me try to understand this. Rand Paul is saying there's no GOP "War on Women" (a slogan that exaggerates) because Clinton had an affair. That's his argument? What an incredibly lame and stupid argument that is.

Here's why: That's not a defense of GOP policies. If he wants to defend GOP policies with regard to women, he should defend those policies. Bringing Bill Clinton's personal behavior from 15 years ago has NOTHING TO DO with GOP policies. Rand Paul, your argument is a giant logical FAIL. 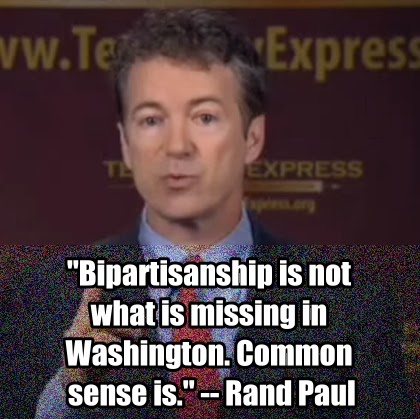 He forgot to bring the sense this time.
Image: thedailysheeple.com
Posted by ModeratePoli at 6:30 PM

There is no GOP "war on women". There's only the demand that they surrender all of the decisions related to women's employment, health and reproductive decisions to GOP-controlled legislatures, GOP-preferred judges, and GOP-endorsed executives (business and government) with respect to those items.

How is that a "war"? It's really more of a "leash". It's just that the Dems know that the GOP "put a leash on women" is not sufficiently headline-grabbing as "war".

But even "put a leash on women" that isn't fair. There's no actual leash. It's more like having a GOP-approved rolled-up newspaper that, if a women doesn't behave as instructed, you smack the woman on the nose with that rolled-up newspaper. "No humping!!" (Smack).

So it's really more like the GOP "behavioral modification plan via a rolled-up newspaper smack on the nose for women". But will the media report it like it really is, or give in to the liberal phrasing of a "war" on women. If only the media would tell the truth.

For what it's worth, my confirm text to post was "clination labuman' which sound pretty dirty and suggestive to me.

@dangerous, so you favor a comparison to dog training? You might get some women angry at you, but some guys might cheer.

I think of it more as "GOP cluelessness about women," though it's more like being totally out of touch because they don't bother thinking about anyone but themselves and they assume that they're superior in decision-making. The GOP are just like the people who bristled at the idea that male Supreme Court justices could learn something for a wise Latina. Of couse they could learn something.

You give them too much credit. You might describe them as "clueless" if you decide that their motives in passing all sorts of LAWS that will apply negatively only to women, as only being paternalistic. I'm not inclined to give them that benefit of the doubt.

Yes, they want to train women to do accept a second-class status. That's a core belief in GOP-land, even among the women who support them. Plus, it earns them votes among many men, who -- surprise, surprise -- basically agree with that tenant even when other GOP positions run counter to their interests. Women earn less? Many men like the idea that they earn more.

What they are really clueless about is any messaging that can effectively blunt their record. If they recognized they were wrong on issues where most women see their true motives, they'd take another position other issues. Don't hold your breath. They'd rather lose the election.