Most evil: Atheists vs. Christians

I saved an article in National Review for reading post-Christmas, when I would have lots of time to mull it over. The thesis of the article has slipped from my steel-trap mind while reading the 900+ comments, but it was something about the West being post-Christian.

The real fascinating issues are debated in the comments. On one side you have the self-proclaimed Christians claiming that humanist/atheists/liberals are the scourge of humanity, and Christianity brought us the best society in the world--the American constitutional nation. According to the Christians: [my selection]

Those contentions got an atheist really angry, and he must have written over 200 comments on the thread. I'm not sure who started the argument over whether the murders by Stalin/Hitler/Mao go into "the Atheists caused it" column or "the Christians caused it" column, but that was the largest point of contention. The atheist, named Heathen philosopher, claimed communism is an outgrowth of Christianity, as was fascism, so the huge 20th century death toll would go on the Christian column. Of course the Christians blame the atheists/humanists.

Heathen philosopher  (I'll call him the Atheist) makes the better arguments generally. He argues that the Christians aren't as clean as they claim since they have a shitload of massacres clearly in their column. He also does a decent job of refuting the contention that atheists/humanists deserve the demerits for the Stalin/Hitler massacres, since these occurred in cultures that were steeped in Christianity. He points out that Stalin and Hitler just followed from earlier models that flourished in explicitly Christian times.

The Atheist also avoids the pitfalls of labeling everything Christian as evil, noting a few merits of Christianity and demerits of some atheists too. It's not hard to avoid the pitfall of wildly exaggerating the evil of your opponent, yet so many commenters make this mistake.

The Christians put themselves in a poor position by not acknowledging the violent history of Christian countries. They also claim that all the improvements in societies since the 18th century were due to the West being steeped in Christianity, when not explicitly Christian. So the Christian side both rejects the "steepage" argument and uses it when convenient.


Who can claim the Enlightenment?

The Atheist also raises the issue of classical Greek philosophy and its contribution to the Enlightenment and our constitution. I'm a strong advocate of the Greek philosophers, particularly the Socratic method, so I don't need much convincing. The Christians don't address this issue much, perhaps because it ruins their dichotomy of the Christian vs. atheist/humanist.

The Christians try to defeat the arguments of the Atheist by imputing the worst of humanism onto him. According to them, he's a humanist so he believes the central humanist tenets that man is the measure of all things and is perfectable, rather than being fallen by nature and needing the ministrations of a merciful God. The Atheist denies believing that man is perfectable, as well he should because all evidence runs strongly against that belief.

Unfortunately, this argument doesn't settle a question that is more important than "who's the worst?" That question is "who's responsible for the Enlightenment and the constitution?" My first stab at this would be to guess that it's classical Greek philosophy, but I have to wonder what role Christianity played. The Greek philosophy seemed to need to percolate through centuries of Christianity before it bubbled up as the Enlightenment.

There is a futility in the blame game that each side plays, especially if you're only doing a body count. The blame game doesn't include any honest analysis of why the death toll was so high and how to prevent the violence. It's really about trying to score points, especially on the Christians' side. Perhaps that's a large part of the reason why their arguments fail--they aren't searching for truth, they're looking for a superficial win on points.

The big loser in the arguments, besides fair and honest discussion, is the idea that we can perfect our societies. Theocracies have a terrible record--the more they try to purge, the higher the death count goes with no real progress made to the perfect earthly society. Communist and fascist countries have major death tolls also. We in the US can't sit too high on our laurels either since there was plenty of genocide in our Indian wars, slavery, and racial and ethnic discrimination and killing, which hopefully we aren't still practicing. The hope of a society to purge its way to improvement is demonstrated as bloody awful and misguided many times over in history. Perhaps we (I) should be remembering that was we try to fight Islamic terrorists. 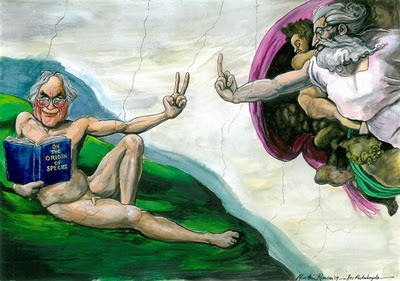 Here are some of the highlights of the discussion for those who are interested but less dogged than me in reading all the comments:
My reply to these pro-Christian assertions at the beginning of the post are:
Posted by ModeratePoli at 7:27 PM

I guess we'll get the answers to all of these questions in the afterlife, huh?

For a preview, I'm pretty sure that -- as with almost all human affairs -- the answer will be sometimes true and sometimes false.