We've had pizza shop owners, with video running, say that they wouldn't cater a same-sex wedding because they're Christians. I have my doubts that this was a carefully considered statement.

In contrast, here is a Christian photographer trying to work through the issue:


"I've been asked to photograph a same-sex wedding service (legal in my state), and I’ve said no. I wonder if I did the right thing. After all, this is a business, providing a service. Would it be right for me to refuse to serve a gay couple if I owned a restaurant? I don’t think so... Moreover, I’m not sure that photographing an event is an endorsement of that event. I have photographed weddings of people who were divorced (and I didn’t investigate the background), people who were probably cohabiting, people who were most likely unequally yoked to one another, and so on.

So I’m kind of caught. My conscience bothers me because I turned this couple down, and my conscience will bother me if I photograph this wedding."

Here, thank God, is a person who sees the different sides of the issue. Is it fair to hold same-sex people as worse and different from the other sinners he photographs--though note that he doesn't 'investigate' the details of his clients' sins. He seems to take a reasonable, business-like approach that their sins aren't really his concern. That was probably how Christian photographers, bakers, and caterers handled divorced, cohabiting, and all the others who weren't holding off on sex until marriage. Perhaps most of these Christian businesspeople didn't even think of these couples as sinful.

As for the commandments of God, I have no sense of that at all, except that we should do good and not waste our lives. I don't believe, as my parents did, that sex before marriage is wrong, and God says so. In fact, I find that idea either absurd or a cultural/historical artifact.

So I think anti-gay bias is another cultural/historical artifact, and a lot of Americans seem to agree with that.

The Christian photographer raising the question of conscience wasn't sure. The minister answering wasn't sure either. What is sad is that the minister doesn't grapple with the issue of why it's moral to serve gay patrons at a restaurant, but not at their wedding. The minister's decision comes down to the problem of giving mixed messages to those around you as to whether same-sex marriage is OK or not. This seems odd to me that the issue comes down to not wanting to confuse other people--that doesn't seem typical for moral issues, that you don't do X because it might confuse people. I have to wonder whether the minister couldn't come up with a better reason, and had to settle for this weak one--since he wasn't going to go the hate/abomination route.

Strict Christians will be grappling with these issues, but they've done it before, as sexual mores have changed. Courts have told Christians that they couldn't deny rentals to unmarried, cohabiting couples. I don't recall a major backlash over that. Perhaps it seemed too much like not renting to black couples or interracial couples, so the Christian landlords didn't want to go there.

Perhaps it's an issue for more Christians this time because they can play the underdog against the powerful liberal tide. Gay couples have helped their underdog status by suing them even when the same services from other vendors are readily available. But whether in suing or in refusing, conscience rarely (but occasionally) seems to be the main concern. 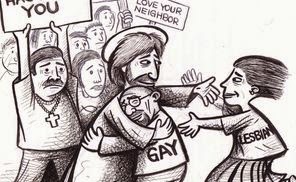 Extras. NY farm owners stopped doing weddings (but not receptions) I hope they found their comfort zone. Julian Sanchez doesn't know where to draw the line either. A list of objectors--a mixed bag.

These Christians seem to think that they're the sole possessors of rigorous thinking. They are also the stalwarts who "refuse to call what is good evil, and what is evil, good." They imagine that they have a monopoly on right thinking, and I intensely dislike monopolies.
Posted by ModeratePoli at 9:17 PM

To me, the issue is much clearer than you present, particularly with respect to the photographer supposedly fighting his conscience. He's violating the Golden Rule in refusing to provide a service which he normally would simply on the basis of a learned bias. The choice is much simpler: Would he attend a same-sex marriage of a close friend or family member, or risk complete alienation of that relationship by refusing to attend? If he would accept circumstances in that situation and attend, then there should be no issue performing a service for strangers. To do anything else would violate the Golden Rule.

This is also why refusal based on disapproval is such as weak argument, as you point out. The "message" of disapproval is actually a reflection of biased superiority. One may personally find homosexuality disgusting or even abhorrent, but still treat the people who engage in it fairly.

@dangerous, You don't have much sense about religious belief, which is why it seems to clear-cut to you. To you, rules from the bible are "a learned bias."

However, maybe they're a cultural bias, or maybe it is teaching from God. If you believe in teachings from God, how do you know which category the anti-homosexual message fits into? This is a question that a devout believer may have to struggle with. Do you have any empathy with that struggle? I don't think you do.