What have we learned about the Mideast?

Top of the list would have to be that there isn't an easy way in and back out. If we try to limit our engagement, the situation on the ground quickly spins out of control (see Libya and Syria). If we put in more resources, we're sucked in for more than we counted on (see Iraq).

The only proven winning strategy is (drum roll) ... non-existent.

That's tempering what Obama is currently doing in the Mideast, but not what some of the GOP candidates are declaring. Joke-candidate Donald Trump says that we can bomb the hell out of the oilfields, encircle them, and then send in Mobil to extract the oil to pay for the mission. This would be the best way to get rid of ISIS, according to him.

Great plan! I don't see anything wrong with it, since it obviously worked for Russia when they wanted Crimea. No one in the whole world will complain and make it stick if we do it. We won't have to worry about the drip-drip-drip of IED warfare because, um, well Donald's not worried about that.

Moving from the laughable to the merely deluded, we have Jeb Bush praising the surge and pretending everything would have been peachy if only Obama had kept troops in Iraq. This strategy worked so well in Afghanistan that we didn't need a surge there, or did we? For some reason, keeping troops in Iraq would have made everything turn out fine in Syria, would have prevented ISIS from invading Iraq, and other magical stuff. Back in the real world, perhaps ISIS wouldn't have taken over as much of Iraq as it did, but assuming better outcomes than that is quite a stretch.

Jeb Bush, of course, isn't deterred from engaging in such fantasy. He declares that by defeating Assad, we'll also defeat ISIS, "but we have to make sure that his regime is not replaced by something as bad or worse." Unfortunately, there weren't any hints on just how we "make sure."

Is anyone falling for that? I doubt it. I don't even think GOP supporters believe it. How could they, after the Iraq war, the Afghanistan war, the Syrian civil war (ongoing), Vietnam, and Korea? They may pretend that they believe, just like Trump and Jeb Bush pretend, but that's a whole different thing from actually believing. 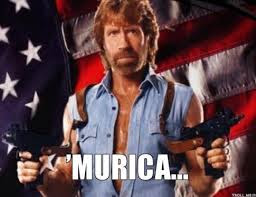 Extra. One war Trump definitely could win (funny).
Posted by ModeratePoli at 10:03 PM