Another 'Cops should be perfect' story

I'm so incredibly tired of people defending assailants who shoot at the police. Here's the latest:


Police: Cops Fired Into Car Not Knowing Infant Was Inside

Look at the entire story, and you find out that this headline would also be applicable:

In this case, a man with a long criminal history put himself, his girlfriend, and her 4-month-old son in grave danger by shooting at police. He actually knew who was in the car. He knew how many weapons he had. He initiated the exchange of gunfire. Is it really surprising that the police shot back? Should they have waited to see if he would shoot again, maybe blowing someone's head off?

According to the girlfriend's mother, yes, they should have waited. They should have put themselves in that dangerous position rather than fire into the car. According to her, the law enforcement officers should take on all the risk, so that her daughter, who was riding with a criminal who had more than one loaded gun, and who shot at police, could be safe.

To me, this is a patently ridiculous viewpoint. Perhaps it's mitigated because the mother is grief-stricken, but I've seen it too often to think that it's grief every time. Instead, it's become a pattern among many blacks to blame the police, no matter how justified they are.

I think this shooting should be investigated, as all police-involved shootings should be. However, if the current reporting is fairly accurate, then the family of the dead couple have nothing to blame the police for. Any blame they lay on the police is misguided scapegoating, and should clearly be labeled that way. And I have to question the motives of people who don't support the police in cases like this but instead support dangerous criminals. It looks like a case of playing the racial victim card and hoping that the audience doesn't notice that the 'victim' is not innocent at all. 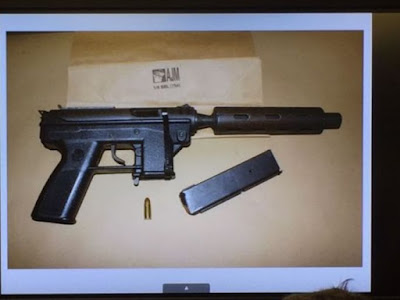 The shooter's other gun
Image: 13newsnow.com
Posted by ModeratePoli at 9:00 PM

Bad editorial decision designed to draw an audience with a deceptive detail. The real headline is: Dangerous Asshole Uses Infant As Human Shield in Shootout with Cops.