An alternative to sending Kim Davis to jail

If you're a judge trying to ensure compliance with the law, what can you do when someone like Kim Davis absolutely and publicly refuses to follow the law?

I'm not sure there's an alternative to 'showing them who's boss,' with 'boss' being the law, not the judge. I think it was correct to send Kim Davis to jail, and it was correct to release her once her office started issuing marriage licenses to all who qualified, including same-sex couples.

This article, however, suggests a very good alternative to jailing Ms. Davis:

Bunning could have simply ordered that, if Davis would not carry out her constitutional obligation to issue marriage licenses on an equal basis, she would be forbidden to issue marriage licenses at all. Under Kentucky law, the responsibility for issuing marriage licenses would then devolve onto Rowan County Judge/Executive Walter “Doc” Blevins, who had expressed willingness to issue the licenses on an equal basis. To ensure that Davis did not reap a windfall from that decision, Bunning could have ordered the county to withhold whatever portion of Davis’s salary was attributable to her marriage-license duties and to use that money to reimburse the judge/executive’s office.

Yes, that does sound a good solution. 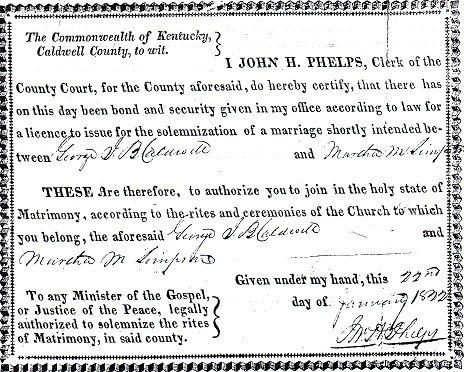 Posted by ModeratePoli at 12:17 PM

Perhaps this would work, but it's not clear exactly what Kentucky law would allow, whether a federal judge has the authority to order that, and whether Kentucky would have to adhere to it.

Besides, I think DID stop her office from issuing any marriage licenses at all.

Accommodations to bigotry only invite more of it. She can either resign or fulfill her duties. If she authorizes her deputies to issue licenses, that is enough, and her surrender in my opinion. She will accept a fiction, rather than truly face her problem of conscience.