Short: What went wrong with Walker

Buried in a predictable but correct article by Sean Trende is perhaps the best guess at what happened to Walker's bid for the presidency:

...A presidential candidate has a more-than-full-time job: being a candidate. He or she does not have time to follow ever-changing electoral dynamics. So when a candidate without a good strategist is faced with Supreme Court decisions on gay marriage, questions about the legality of abortion to save the life of the mother, the rise of birthright citizenship as an issue or, say, the ascendency of Donald Trump, that candidate will flail.

Sounds plausible to me. Of course I read many comments from Wisconsiners about how horrid Walker was and predicting his failure. However, you can always predict the failure of a presidential candidate, and 95% of the time you'll be right. Only one person is going to make it to the White House, and all the others will reward your dour predictions. Predicting the winner is hard, predicting a loser is like hitting the broad side of a barn. I guess Walker hit that barn pretty hard. 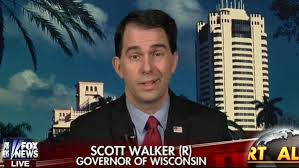 ...Or did he tank because he frequently looks like a doofus?
Posted by ModeratePoli at 11:24 PM

Good riddance. Of all the GOP candidates, he arguably would have been the worst possible president of the bunch, combining the worst qualities of Nixon and McCarthy.

One always needs to be wary of anyone with such zeal to punish political opponents and, particularly, when that becomes an end in itself. Walker was every bit of that, playing the 50.1% strategy to divide the people of Wisconsin. Here in Pa., politicians have more sense than that. But Walker tried to run on his approach anyway, selling that he could make viciousness work in a purple state. I'm actually surprised it didn't work better for the segment of the GOP that wants to crush opposition and wipe all things Obama and Democrat from the face of the country and install a Republican utopia of anti-union, anti-choice, anti-tolerance, anti-community, anti-intellectual corporate-run capital/christianitialism.

Still, don't be surprised if he ends up on the ticket somehow, perhaps as VP or as a compromise nominee if the GOP is deadlocked at the convention, which is a real possibility. His campaign sucked, but his pitch is a good reflection of the core of the GOP mindset.

@dangerous, I agree with what you say about Walker's strategy in Wisconsin. I disagree that he could be a VP choice. He's shown himself to be a failed national campaigner. It would be a stupid, avoidable mistake to choose him as VP, and I don't see the eventual winner making that mistake. He's kaput.