Peeling through the many reasons for Boehner's resignation

Boehner's resignation is not a surprise to me. I don't know how he could stand the job. That said, I didn't know he would resign imminently, or that it would be on Friday, Sept. 25. So why now?

Reading the news reports, at first it sounded like Boehner was somehow inspired by the Pope's visit. Boehner stated that he woke up and knew that "this is the day."

The same story says that Boehner had determined to resign on his 66th birthday on Nov. 17, but brought it forward by a few weeks. Foolish me, I thought he finally got fed up.

Luckily I can read, and found much more revealing reports elsewhere. This article lays out the actual reasons pretty clearly:
So the arch-conservatives are forcing Boehner out. This will almost certainly be destabilizing. The Freedom Caucus will either force a shutdown, or will face the humiliation of not being able to force one. Can that really be a good idea? It doesn't sound like a good idea now, but forcing a shutdown in mid-December, just in time for Christmas, sounds even worse.

Maybe they'll wait until February, except that it's primary season, so that's not a good time either. The further they push the shutdown, the closer to Election Day it gets. So a failed shutdown (the outcome I predict) will be fresher in the minds of voters.

THIS IS THEIR STRATEGY?

Unbelievable. I have got to watch this melodrama unfold. It may even be better than The Walking Dead. We may have flesh-eating conservatives attacking fellow GOPers on the House floor. Maybe Dems will come in toting assault rifles. What a spectacle! I can't wait! (Or maybe I'm losing my mind. Time to stop blogging for tonight.) 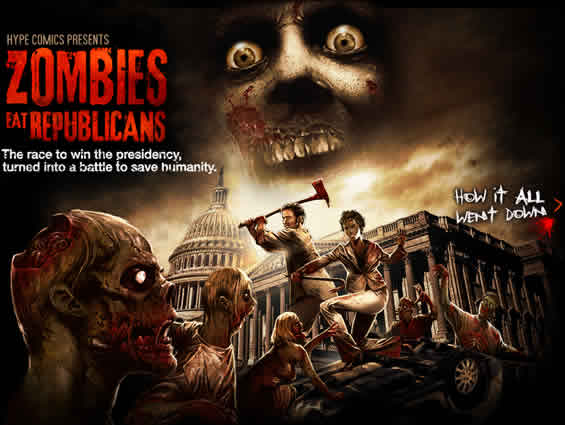 Extras. The conservative press didn't seem to know the resignation/ouster was about to happen. No articles in HotAir, Daily Caller, etc. announcing a planned move. The Hill warned about the coup two days before Boehner's resignation. A member of the Freedom Caucus told a local Arizona paper about growing discontent. But when hasn't there been growing discontent?

A listing from 538 of the ultra-conservatives who ousted Boehner. Maybe some Democrats were going to prop up Boehner. A reasonably good summary of Boehner's history from a MSM perspective. Most interesting point: Boehner got to the top of the leadership pyramid because he wasn't highly implicated in the lobbying (Abramoff) scandals that wiped out most of the House GOP leadership.
Posted by ModeratePoli at 11:06 PM

Boehner clearly wanted to stay as Speaker until after the Pope's visit. Once that was accomplished, he had no personal reasons to continue to put up with the nonsense from his own party, and who can blame him. But you reap what you sow. Boehner was a cheerleader for what he now despises since it turned on him for not believing 100% in what he wanted for political advantage.