The ability, the desire, and a receptive audience

This is how Trump won.

Trump was smart to make immigration his top issue. Politicians have been ignoring this growing problem for decades. They've had good political reasons not to tackle it, as I've said before. Finally this year, there was a major contender who wasn't a weasel on immigration. That had a huge appeal.

I also speculate that GOP voters have been primed for Trump and his kind of rhetoric by the many conservative talk radio commentators. In fact, Trump sounds like a less intellectual Rush Limbaugh. Just think of the similarities--insulting women unless they're beautiful and supportive, ridiculing the disability of a public figure, quickly blaming convenient scapegoats with no analysis of the real problems.

Trump very much resembles a conservative talk radio hack. One difference is that Trump had enough reserves (of income and prestige), so he could give up his show (a reality TV show, not a radio show) and go out to campaign. Maybe a lot of talk radio jocks are wishing they had done it first, but they weren't egotistical enough, whereas Trump was.

I'll probably never know whether talk radio was as influential as I think it was. Therefore, I can keep on believing! Nothing will stop me this time! Yes! Make America Great Again! 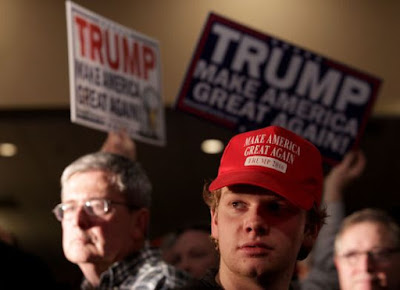 Extra. Jonathan Chait fuming on why Trump won.
Posted by ModeratePoli at 2:41 PM

MP, I take it that last paragraph was making an ironic point.