Predicting Trump's victory a year ago

OK, the headline is a bit of an exaggeration. The historian/researcher, Norm Ornstein, didn't predict Trump would be the nominee, but was well ahead of the curve in seeing the potential. In this article, Ornstein reports:


"Going back to last April and May [of 2015], every poll of Republicans showed 60-70 per cent support for outsiders and insurgent candidates and 20 per cent or less for establishment figures."

So, if Ornstein was right about this, maybe he has a good sense of what is wrong in the GOP. To paraphrase him from elsewhere in the article: GOP politicians made pie-in-the-sky promises, their constituents believed them, and the constituents are now driven by anger and disgust at those conventional GOP pols. Thus we have Trump.

In a different article (which centers mostly on Reince Priebus, national chairman of the GOP), we may see a hint of how Trump capitalized on this rage:


"He explained the genesis of his heterodox views. 'I'm not sure I got there through deep analysis,' he said. 'My views are what everybody else’s views are. When I give speeches, sometimes I’ll sign autographs and I’ll get to talk to people and learn a lot about the party... When I made my [announcement] speech at Trump Tower, the June 16 speech, I didn’t know about the Gang of Eight. … I just knew instinctively that our borders are a mess.'"

So perhaps Trump mostly channels the anger he hears from the Republican base. If so, by what means does he hear it? It is through careful discussions, focus groups, polling, broad reading in the media? [That's just a joke. I strongly doubt that Trump is methodical like that.] More likely it's through a hodge-podge of twitter, talk radio, and God knows what else.

So what we have again is a politician making promises to the GOP base. Will Trump succeed where the others didn't? I'd like to say there isn't a chance in the world, but the world has been topsy-turvy for a while now. So perhaps I shouldn't predict anything. 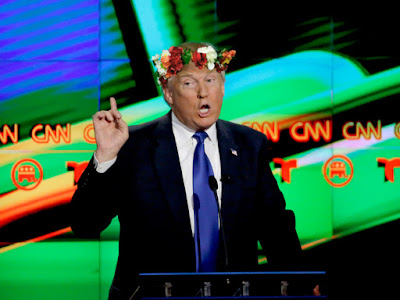 Update 7/19/16. Norm Ornstein has some more predictions in this article. I hope I remember to check them in a year or so.

Posted by ModeratePoli at 1:55 PM