Sigh. I know I spend too much time on the internet, and sometimes get enraged (or merely involved) with gullible people who have fallen for various conspiracy theories. There are theories about CFR (Council for Foreign Relations), PNAC (Project for the New American Century), 9/11 truthers, and, of course, lizard people.

A crazy commenter, Stonehillady, got me thinking about how the World Trade Center towers fell. In turn, I found a great site that explains it very well, while pointing out the flaws in the half-baked conspiracy theories.

Here's one: how many pounds of thermite would be needed to bring down the Twin Towers? I read it somewhere (can't find it now), and the load would have taken something like nine trucks full of thermite. Then the charges would have had to be placed and wired, and who knows what else. And it was all set up to coincide with terrorists flying planes into the towers. Amazing planning that must have been! Literally incredible and unbelievable.

So, if you don't believe the thermite hypothesis (hint: don't believe it), here is a fairly thorough explanation of why the towers collapsed. I can't give a particularly short version of the explanation, except to say it was a combination of the construction, impact of the plane, fire, and buckling of the supports under those conditions. Read the whole thing if you're interested. I learned a lot. 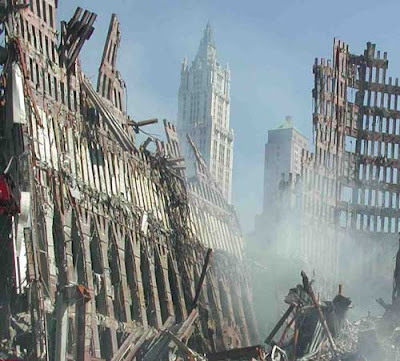 Posted by ModeratePoli at 12:00 PM

I've seen a NOVA episode on it which explains it quite clearly: a cascade collapse of one floor onto the next after the supports on the edges bent due to the heat of the fire inside the building, which acted like a huge chimney and had plenty of material to burn fast such as paper.

Conspiracy theories are just one method people deploy to try to create "media truth". There are lots of other methods (see: Donald Trump) and in the end the point of media truth is to create a spectacle of fiction that become some sort of reality.