What do you imagine when you see headlines like this?

I wanted to find out how accurate these reports were, and whether a few incidents were exaggerated to make it sound like a lot of violence had taken place. I focused on news stories with video so I could see for myself what occurred, with the caveat that the video wouldn't show me everything, including what happened beforehand and what the motivations were.

The first video I saw showed anti-Trump protesters engaging with Trump supporters in fist fights. I can't tell who threw the first punch, but both sides seem to be eager to punch the other. There are also people trying to calm the situation down, and also a large number of people taking video. This doesn't look like an attack on peaceful Trump supporters by an overwhelming number of violent opponents.

I looked at other video also, such as the woman covered with egg. She's smiling, reaching out, and waving as she's hit with other (light) thrown objects. She is far-outnumbered by anti-Trump supporters, but they don't appear to be trying to punch or beat her. Then, at the end, you get to see why she isn't fearful. There are several burly men that escort her back inside the building. My guess is that they're security guards for the rally. This woman probably went out an exit that was surrounded by anti-Trump protesters with the goal of goading them into violence. But the presence of the security detail and partial restraint by the crowd prevented violence (other than throwing eggs) at that location. Again, some actions were wrong, but not a lot else to condemn there.

Finally, I found a report that covered a large number of incidents, including individuals or couplse harassed with punches and thrown bottles as they left the rally. Their cars were also damaged by protesters who followed them into a parking garage.
My conclusion was that there was unwarranted violence on the part of some of the anti-Trump protesters, However, the violence was more on the level of a bar brawl than a full riot. There were no pictures of anyone incapacitated by a beating and taken away on a stretcher. Property damage, though there was some, as minor, especially compared to the riots in Ferguson and Baltimore.

It's good to know what the real level of violence was, because some conservatives or their media outlets are going to distort this. We can count on that. 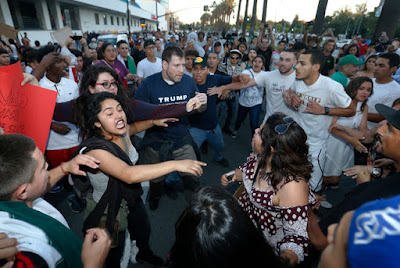 One final thought. Obama has been accused of being the most divisive president ever. However, Trump seems to inspire much more division. Will conservatives notice this?

Extras. Videos: Trump supporter with lots of footage, Part 1 and Part 2. Eye witnesses with competing commentary. Long loud argument, no punches, one theft. General footage with play by play, then blaming it all on--well, guess who.

Posted by ModeratePoli at 2:21 PM

There are more ways to commit violence than throwing eggs or fists. Threatening someone with deportation, or profiling, or enforced prejudice is just as violent. And that's what Trump and his supporters are doing so it is no surprise that some of his opponent proactively reinforce the message.

This is typically bully behavior -- including Trump's supporters -- setting the stage for retaliation then playing the victim. "Give me your lunch money or I'll pound you" when met with physical resistance looks like the resisting people are the violent ones. But there's a legal premise known as "fighting words" so that the Trump's supporters, upon hearing and echoing his rhetoric with as little as his signature baseball cap, are inviting the pushback. Are they intimidated? Certainly. Should they be? Yes. They should expect it and recognize that supporting a bigot has consequences, not all of them pleasant.

That said, there are better ways to let Trump supporters know that their positions are politically incorrect. Nobody should face physical harm for their political expressions. However, facing an angry mob of protestors is something they should have to endure. The police should be out in force making a boundary between the protestors and Trump supporters, but supporters should have to witness the vehemence of Trump's opponents.