Alex Jones may be the most despicable person in the US. He has his "Sandy Hook hoax" nonsense, which inspires his followers to harass bereaved families. He had his Pizzagate nonsense. Some of his latest nonsense is the idea that children are being kidnapped, sent to Mars, put into slavery, frightened to produce adrenaline, slaughtered, and dismembered for their body parts.

To be fair, this isn't Alex Jones' theory. Just the theory of one of his guests, and Jones can't be held responsible for giving this nutjob bandwidth... are can he?

Jones contributes to the idea. Jones mentions blackouts of probes whenever they go close to Mars. NASA has lots of secrets, etc. But Jones also says "I'm not sure about ...." as though that inoculates him. The scumbag newscaster and his scumbag crazy stories have forced NASA to waste time in denials of this ludicrous fairy tale. Of course, some fools will go on believing it, and nothing will dissuade them, ever. Thank you, Alex Jones, for another false story that will never die. 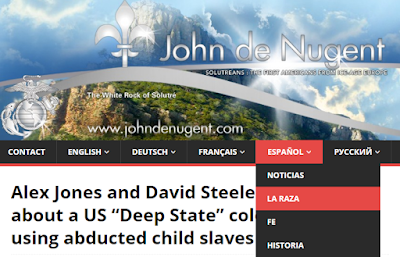 Posted by ModeratePoli at 7:11 PM