Replacing Obamacare is harder than they thought

No surprise about the complexity of the task. The House just barely passed an Obamacare repeal-and-replacement. Now the Senate is trying to do it, and having even more trouble. While the House has some moderate Republicans, every moderate Republican in the Senate has a critical vote. Three defections to 'no' will scuttle the ACA replacement, so the margins in the Senate are even tighter. Also, each senator represents the whole state, not just the more conservative parts of it. It could be that senators need to be more concerned with Medicaid recipients than their colleagues in the House.

It's fascinating to read in this article what different senators want. Rand Paul and Ben Sasse (he of anti-Trump fame) would support a straight repeal. Is that position for real? Don't they worry about the ensuing chaos if there is no replacement plan?

Sen. Bill Cassidy of Louisiana, someone I wouldn't expect to be a moderate, is holding off on supporting the bill if it removes too much money from Medicaid. Louisiana isn't one of the richest states, so it probably has a fair number of people who have gotten their healthcare through the Medicaid expansion. Cassidy seems loathe to throw them back into healthcare limbo. Some senators, like Rand Paul, don't have such quibbles.

These negotiations will be interesting to watch. A pro-Trump PAC already targeted a senator leaning toward 'no' and already had to drop their pressure tactics. Whether the senators will be able to come together, compromise, and satisfy enough of them is an open question. A cool graphic in this article shows that more senators are concerned with the bill not covering enough versus those concerned with that it won't repeal enough. It leads me to expect a more moderate bill passing the Senate. But we shall see. Failure is certainly possible: only three senators need to decide to be stubborn to sink this bill. 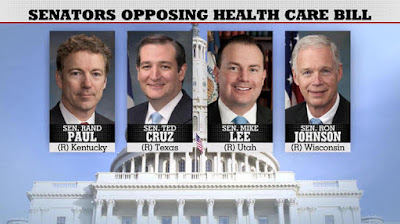 Posted by ModeratePoli at 1:24 AM