Do we need a Megan's Law for bathrooms?

I read how Texas is considering a law governing how transgender people can use public bathrooms. It occurred to me that Texas isn't debating this law because there was a horrific case of a transgender person horribly raping and/or killing a girl in a bathroom. This didn't happen to little Rachel or Gloria or Brittany, so there's no Rachel's Law. Nope.

This is so fake. I can assure you that transgender people are using the appropriate bathrooms in Texas without incident. They aren't raping anyone, they aren't exposing their genitals to the shock and disgust of other patrons. They are just going into the stalls, locking the doors, and answering nature's call. Just like the rest of the human species. Sheesh, give the paranoia a rest. Give the excuses to bash liberals a rest.

Do we need a Megan's Law for bathrooms? No, we don't. We don't need any laws. Just let people pick their bathrooms, and keep out of the way. 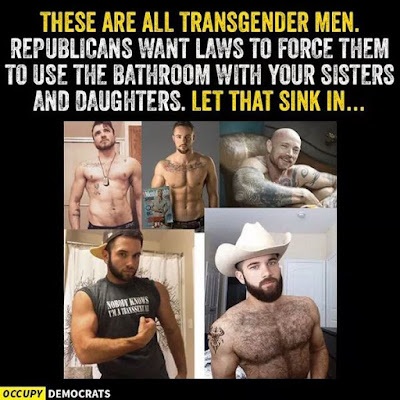 Posted by ModeratePoli at 3:43 PM