From this article, I learned that I need to watch out for the GOP commission that is investigating voter fraud. Why? Because the head of the commission, Kris Kobach of Kansas, has already investigated voter fraud and found very little of it, but he hasn't publicized that finding.

It doesn't make sense to hide the info that voter fraud isn't common... unless you really like the narrative that it is common. Trump likes the narrative. Apparently, Kobach is fine with the narrative too because he's not pushing back against it. Maybe Kobach hopes he can find major fraud elsewhere, even if he didn't find it in Kansas. Personally, I'm not convinced that California, for example, does a good job policing its voter rolls. I tried to sign up to vote in California a few years ago, and probably would have been successful if I didn't bail at the last minute of the online process. No, I'm not going to commit the fraud of registering to vote in California just to find out if it's possible. Maybe California has tightened up, but I haven't seen any evidence of that, or any reports of what they do to investigate ineligible voters. To be clear, I have looked for evidence, but haven't found any published information about California's efforts to prevent voter fraud.

So maybe the commission investigating voter fraud will find a bit of fraud, or a moderate amount, or maybe even a huge amount (doubtful). So far, though, it's barely started, and it's already sputtering. Its first request for cooperation from the states was horribly mismanaged. The commission asked for private info such as birth dates and partial Social Security numbers without ensuring confidentiality. In fact, it was planning to have the information publicly available. They have got to be kidding--putting everyone's name, address, and birth date up in public. That's an immediate FAIL I have to wonder how professional this commission is going to be, and my hopes aren't high. 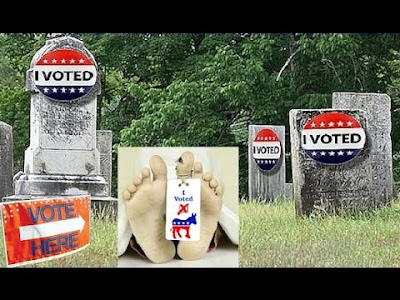 Extra. I didn't know that there has already been a nation-wide effort to investigate and punish illegal voting. The results: about 60 convictions in 4 years. Not millions, not thousands, not even hundreds. Pretty paltry. I hope this commission finds nearly the same number of illegal votes and is honest enough to report it without hyperbole.

Posted by ModeratePoli at 10:42 PM

Here's what a honest and thorough review of voter data will find:

1) A small number of dead people vote in every election. Nearly all of them sent in their absentee ballots in advance (because many of them were sick) and died prior to election day, but the election bureau didn't know and counted the votes anyway. But it makes a great headline to announce that 10,000 dead people voted in the last national election.
2) There are many people with the same name and birthdate who voted in the last election, probably in the tens of thousands, but they are not the same person. But it makes a great headline to say that perhaps 50,000 people voted twice in the last election. (Probably no asterisk in the headline.)
3) Ditto to #2 for same last four digits of SS# and name.
4) Hundreds of thousands to millions of people have multiple registrations (including yours truly) because they moved and didn't bother to call their local election board to drop their old registration. Some may have even voted twice. Some by accident, some out of ignorance, and a handful intentionally violated the law to get what exactly compared to the penalty we can't say for sure.
5) Voter rolls are a mess, but few issues rise to the level of criminality, and the cases of false positives will far outnumber the cases of true fraud, as opposed to voter or election board misunderstanding or error.

What an honest and thorough review of voter data will never find is widespread (meaning intentional) effort to commit voting fraud via any means to swing an election because ...

A) Any organized effort impacting enough votes via individual means could never be kept secret;
B) No group of people undertakes the effort without coordination because the penalties far outweigh the benefits and the likelihood that the effort would result in a change in the election result from unfavorable to favorable for the parties committing the fraud; and
C) Individual efforts would be hard to detect anyway because concealment is so simple via, for example, casting someone else's absentee ballot or registering in another jurisdiction under an assumed name.

But, of course, the question returns to why someone would commit voter fraud just to vote more than once, particularly when the direct benefit to them is non-existent and the penalties are so great? The answer is that they wouldn't. And since organized voter fraud couldn't be kept secret, there's no mechanism at all to alter the election result to one's advantage or preference.

Of course, no logic matters when the benefits to the vote suppressors can be both organized and legal if they can convince people of a lie.