Decoding anonymous sources. A good guide from Lawfare. How to interpret what reporters write, indicating how many sources they have and where they are. A good news organization follows these unwritten rules. Bad organizations pretend they follow the rules, but actually make up sources, use known unreliable sources, misleadingly edit and quote, and don't fire reporters and editors who don't follow good standards.

Now, one of those sources. Seymour Hersh is implicated in the Seth Rich-to-Wikileaks story. He claims it's just a rumor. I should dedicate a post to the Seth Rich story, but I'm too lazy. Briefly, Rich was a low-level staffer at the DNC or Hillary campaign and was killed in his DC neighborhood. Cue the conspiracy theories. Fox News got ahead of itself and coerced a contributor to say stuff he didn't actually believe, prompting him to sue. Seymour Hersh is involved because he is supposedly the source of some of that info. There's a tape of Hersh talking about the case. Strangely the tape begins and ends abruptly. I have suspicions that Hersh contradicts or says it's mostly his speculation. I haven't trusted edited tapes since Shirley Sherrod as smeared. Nonetheless, Hersh isn't saying what he knows. He ought to clear it up since the concern about a conspiracy is important here.

Sheriffs as the supreme law. Here is another right-wing idea to counter big, bad government. The concept is that the sheriff, being locally elected and accountable, is the supreme authority in a county, and doesn't have to enforce national laws. Remember Bull Connor and this doesn't seem so good. Joe Arpaio is supposedly an advocate for this idea. Luckily, he lost his last bid for reelection.

Another worrisome tactic to watch. Using Freedom-of-Information requests to undermine and sue small local school districts. Tactic supported by Steve Bannon. The goal is mirky, but maybe it's hidden in the settlements.

Russian election interference (another example). Something to watch. Fake accounts on Facebook bought ad time from Facebook. The purchase was automated, so even Facebook didn't know it was happening. Parking this timeline of Russia interference denial here. Hoping I can find it again. 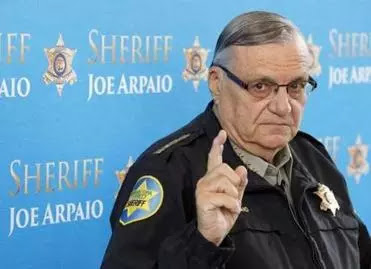 Posted by ModeratePoli at 4:46 PM