Antifa and the MSM

I don't remember what month I first heard of Antifa, which is a loosely organized anti-fascist organization. I do remember how I heard of it. It was mentioned by some right-wing commenters. They implied Antifa were leftists, so I looked up what Antifa was. I thought it was probably some imaginary conspiracy group, like the elitist pedophile ring Hillary runs.

It turns out that Antifa isn't a figment of a nutjob's imagination. It's real, and my usual news sources (Google News with occasionally visits to American Conservative, National Review, Fox News, and Breitbart) had failed me.

I'm not sure why the MSM had barely reported on Antifa until August. It's not that Antifa didn't make appearances. They were involved in the Berkeley riots, and I was certainly aware of those. They were also involved in property destruction on Inauguration Day, and various other demonstrations.

However, the MSM wasn't mentioning that Antifa was a group, and wasn't emphasizing how protesters were violent and coordinated in dress and action. Was the MSM giving cover to Antifa? We probably won't find out unless reporters and/or editors talk about either their lack of knowledge or their suppression of information.

I've been able to confirm the lack of coverage by the MSM through a Google search. From December 2016 to March 2017, the top mentions of Antifa USA are by (in order): Al-Jazeera,  The Guardian, the BBC, The Nation, and Hot Press. In contrast, the top mentions of Antifa USA today are by: USA Today, Facebook, Wikipedia, CNN, The Daily Wire, and The Atlantic. It's definitely a failure by the MSM that the media sources of right-wingers are faster on the information than the MSM is.

It's not that Antifa was totally unknown in the MSM. Here's an article from the New York Times dated 2/2/17 that reports on Antifa. Yet Antifa wasn't referenced in this WaPo article. I recall arguments about whether the violent protesters were students or not, whether they were outsiders who took an opportunity to vandalize. News organizations didn't seem to know... or perhaps a few reporters did, but the information didn't percolate up to the top editor and anchors.

Right wing media perhaps wanted to pretend the violence was by typical leftists, not a violent fringe. Left wing media perhaps wanted to pretend that it wasn't an organized group of violent anti-fascist protesters. Nor were there organized, violent groups who tried to close down Trump rallies. Those anti-Trumpers were individuals who were concerned about Trump's rhetoric, not an organized violent fringe.

Now Antifa is too well known. The MSM still isn't investigating its ties with BLM organizations. They don't delve too far into their communist views, or how they fight violently even when confronting non-violent opponents, or how they're happy to destroy corporate property. Conservative media is pretending Soros, Antifa, and BLM are all one and all violent. Who can you trust? No one.

By the way, this may be the closest thing to the Antifa motto:

They do seem to emphasize the fighting. Let's enjoy some violence for a noble cause... or close enough. 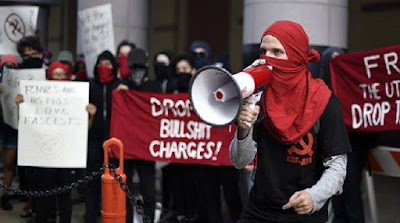 Extras. According to this video, a lot of Antifa are sociology majors who want to be heroes but don't know much about fighting. That fits with what I've seen. Antifa disrupt a peaceful rally in Berkeley.

Posted by ModeratePoli at 1:00 PM