Maybe I was somewhat obsessed about trying to uncover the truth about Charlottesville. Instead reading accounts, I wanted to watch video, preferably unedited, meaning unmanipulated. I wanted to see what I could for myself.

I've watched maybe 10 hours of video, and also read a few additional accounts. Here are some of the things I've learned. 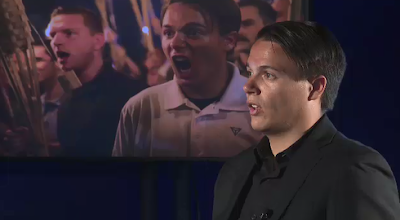 Not quite so bad a person. A student from University of Nevada participated in the torch march, and some pictures of him went viral. Yes, he looks like an enthusiastic Nazi youth. What he says is more complicated than that. He believes in value of all cultures, so he's against segregation, elimination, and the idea of white supremacy. Yes, he marched with some people who felt that way, but he wasn't chanting any slogans he didn't agree with, so he was silent for 'blood and soil.' Somehow, though, he doesn't regret marching with a bunch of people who do believe those things. There was an unsuccessful petition to throw him out of the university, but they refused to on the basis of his right to free speech. Update 6/18/18. Here's an article from a journalism student who went undercover in the same organization as the student from Nevada. Like being a fly on the wall and observing.

Links to many accounts from the LA Times. Another article with many links, focusing on the alt-right view. Helpful map here.

Alt-right manifesto. This story hasn't gotten much play. Richard Spencer wrote the bullet-point list of concerns with the help of a half-dozen prominent colleagues. Race is the highest concern. Second is the 'Jewish question' which alt-righters often abbreviate to 'JQ.'

A neo-Confederate group musters before the rally. Then they march to the park, fighting with counter-protesters once along the way. Over 40 minutes of video. Hunter Wallace, who is taking the video, writes that "wave after wave attempt[ed] to charge the park." His video belies this, showing one attack. At 40:00, he and some other protesters easily walk past 'peaceniks' on the perimeter to enter another portion of the park, showing that at least one major part of the perimeter was peaceful. A written account by another protest leader, from California.

In contrast, video of skirmishes. This might have been the entrance corner where a lot of skirmishes occurred and hand-thrown missiles were regularly flying. Strangely, there were no barricades dividing protesters from counter-protesters in this section of the park.

Armed neutral parties. The work of dividing protesters and counter-protesters who loathed each other and wanted to fight fell to some militia groups, such as the Oath Keepers, 3 Percenters, and a workers' militia called the Redneck Revolt. Militias get involved as a buffer and to protect free speech, but disagree with many of the political positions and especially disdain the chanting and goading.

How did the permit happened. Of course Charlottesville didn't want the rally to take place. An earlier rally of 50 KKK and 1000 counter-protesters showed the potential dangers. However, a judge ruled otherwise. We may continue hearing about Charlottesville for several years as limits on rallies and the use of emergency declarations are litigated. 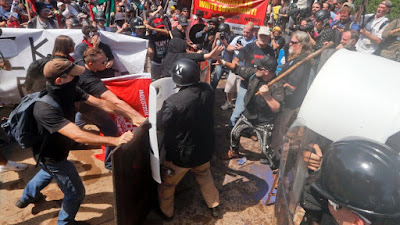 Extras. Guide to the symbols and the cast of characters. A 22-minute documentary on one of the organizers. Skip the middle if you're pressed for time. One alt-right leader decided to opt out because the rally was too racist. Finally, a nurse who is also a neo-Confederate and Jewish talks about the rally. She thinks Nazis are weird, but really hates the counter-protesters for being Marxists, and is not at all sorry about the death. How many were Marxists? Probably a bunch, but it would be helpful to know approximately. However, if you're throwing your lot with Nazis because you don't like Marxists, is that a good choice?

Posted by ModeratePoli at 12:56 AM