This is an important issue, but I don't have a bunch of time to spend on it. The Senate failed to repeal and replace Obamacare. McConnell proposed, negotiated, twisted arms, and pulled bills from votes. It was a big embarrassment, so McConnell and the Senate made a last ditch effort TO DO SOMETHING (never a good situation).

McConnell had the Senate voting on bills or amendments within an hour or so of when their text was released. So much for 'a deliberative body' or not 'ramming it down their throats.' John McCain, with stitches on his left eyebrow and newly diagnosed with brain cancer, flew in from Arizona as a necessary vote to start debate-athon.

Two days later, McCain was one of three GOP senators who killed the effort. Maybe it was doomed anyhow. The conservatives vowed that they needed a fuller repeal, with more taxes gone. They folded pretty quickly. The moderates wanted assurances that Medicaid funding wouldn't disappear--this is a higher priority to senators as state-wide representatives, as I mentioned before.

McConnell promised his colleagues that the bill would go to conference, and their concerns would be addressed in the future. Paul Ryan didn't promise that. What is the promise of a politician like McConnell?

A lot of senators who were leery voted for the measure based on these assurances, but McCain didn't, and that was the killing stroke. 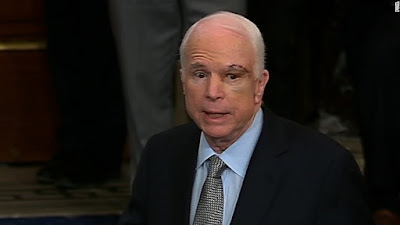 Extras. What next? Maybe some bipartisan negotiation.

Posted by ModeratePoli at 3:11 PM