Note: Many of my sources were from the Daily Stormer site. It has now been kicked off by its hosting ISP, and is having trouble finding a new host. It may have to switch to a Russian host. The Daily Stormer links may not be available again at all, or they may return.

Being an American is not boring. It can be deeply embarrassing, even mortifying sometimes. It can be inspiring. It is not dull. There are so many moral aspects to being a thinking citizen in the US, and some of these aspects were on display this past weekend.

Many groups involved in white supremacy coordinated to sponsor a large rally in Charlottesville, VA, the location of a large state university. I hope I can find the list of the organizers, which I read somewhere in the many articles I read in the past 72 hours.

Maybe I'll start the list of sources where I started--a blog called Occidental Dissent. Some things I noticed: the reference to the confederate flag, how-to information on getting ready for rallies, including comments on how to arm yourself. The list of other alt-right blogs. The blogger is taking donations to fund his participation at rallies, and had collected $675 from 9 donors so far. Then there was the link to The Daily Stormer.

Operational Security is a chilling read. It's describes how to cover your tracks. Use a burner phone for all rally-related communications, and don't put anything personal on it. Don't use hate speech on the phone since it may be used against you and the movement. (The author doesn't follow his own advice since The Daily Stormer is full of hate speech.) If you get involved in 'something heavy,' like homicide, flee the country or flee your identity. Wow. This sounds like advice for people with peaceful intent, doesn't it?

The incidents - Torch march on the UVa campus

The white groups planned a march across the campus on Friday night. I don't know whether they didn't publicize their plan, but there wasn't much organized counter-protest. Again, it must of been chilling to witness hundreds of white supremacists carrying torches, marching, chanting, like being in Germany when the Nazis were gaining strength. There were many people who drawn out to witness, but few organized to resist or counter the message. The white groups  declared a huge victory. They jeered at the few protesters, surrounded them, eventually attacked them and ran them off. This was the huge victory that the groups boasted about.


Anti fascists are surrounded by hundreds of fascists at Jefferson statue. No police.

The main rally was scheduled for Saturday noon at a park where a statue of Robert E. Lee is currently located, but may be removed due to its association with the Confederacy and history of racial bias. The city tried to revoke the permit for the rally, but a federal judge ruled that they must allow it.

However, the crowds turning out, both the white supremacists and the counter protesters, turned out in large numbers and were clearly poised for skirmishes. My speculation (there hasn't been clear reporting) was that the number of counter-protesters was very large partly in reaction to the torch-light rally the night before.

There were also very large numbers of people taking video, some with professional camera equipment. The videos show how many people were recording events. This is wonderful for history--that so many want to witness and capture the events.

Another thing I notice from the videos. Many of the white groups have similar clothing. Many are carrying shields and wearing helmets and other protective gear. They are dressed for confrontation. That kind of organization and preparation were less common among the counter protesters.

The state and local government, based on the conditions that were volatile and unsafe, cancelled the rally. I support this, but I imagine that the city and state will be sued. Already some of the white protest groups are whining that their free speech rights were restricted and the police didn't protect them as they should have. I have no sympathy for them because they were clearly preparing for violence.

A man who earlier in the day joined a white supremacist group called Vanguard America, drove his car at high speed into a large group of counter protesters. One of them died, many others were severely injured. He tried to escape at high speed from the scene, but was observed by many people out on the streets and was caught almost immediately.

The response from the Daily Stormer was particularly repugnant. Someone said the guy was anti-Trump (wrong). Then someone said he acted in self-defense because he was pelted with bricks (wrong). Another said no one of importance was hurt. Another that the driver was Jewish because his mother's surname is 'Bloom.' The fatality was called a fat, childless slut. That is just so lovely. These are people who are hateful and hurtful with no respect for truth or any principles other than tribalism.

There is so much more I could write about, and some of that will be in the extra section. 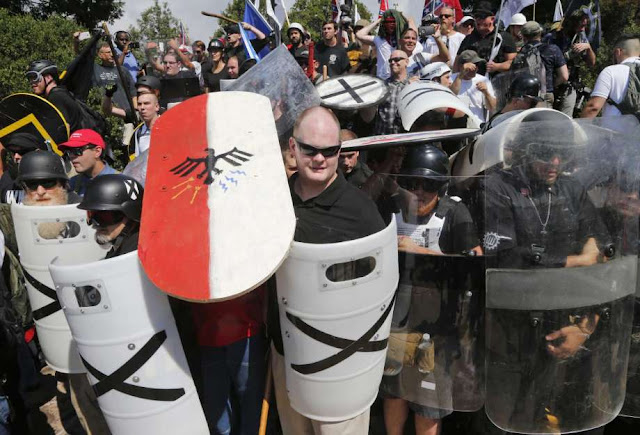 Extras. The live thread from the Daily Stormer is chilling--the triumphalism, the complaints that the police didn't protect them in their quest to provoke fights, their pretended innocence, their hate for so many others with the least bit of difference, their whining after a death that their free speech (a news conference that next day) wasn't protected from huge outraged crowds. The comment thread. A pretty good timeline.

The propaganda machine for the alt-right has been fairly successful. Too many think that the leftist counter protesters are the problem, including this soon-to-be-former GOP official. Unfortunately, our idiot president is also one of those who have drunk the Kool-Aid of right-wing propaganda. He spoke about the murder and mayhem with no conviction, and with weasel words about 'many sides' being wrong, as though it was expedient for him to gloss over the involvement of white supremacists. Trump deserves the flack he caught: this from the Weekly Standard, this much blunter, harsher, and painfully true piece from the Washington Post. The alt-right were happy with Trump's vagueness, and with his grudging slightly strong statement two days later.

One of the first on-the-ground accounts I read. Several others. How this may be pivotal for the white supremacy movement. At a white supremacy rally in Seattle one day later, a huge police presence prevented violence, not to say this was possible in Charlottesville.

Update 8/15/17. Trump has returned to saying that there were 'bad people' on many sides, or both sides. He seems to have a clearer sense now that there were neo-Nazis there. However, he seems to think the right-wing hate groups weren't a majority of the right-wing people there. (My sense is that a majority did identify as white rights supporters at best, and often KKK or neo-Nazi.) Trump seems to understand that there were good people among the counter protesters, but he focuses on the bad ones. The press seems not to acknowledge at all the violent groups among the counter protesters. In this, Trump is more accurate than the press. So Trump underplays the bad actors among the right, overplays the bad actors among the left, and seems not to know at all about the Nazi-like march on Friday night.

Update 8/16/17. It's important to see what The Daily Stormer was writing and showing about the Charlottesville rallies. I took a screen shot which provides information that isn't available now. Here is the screen shot: (Click to enlarge.) 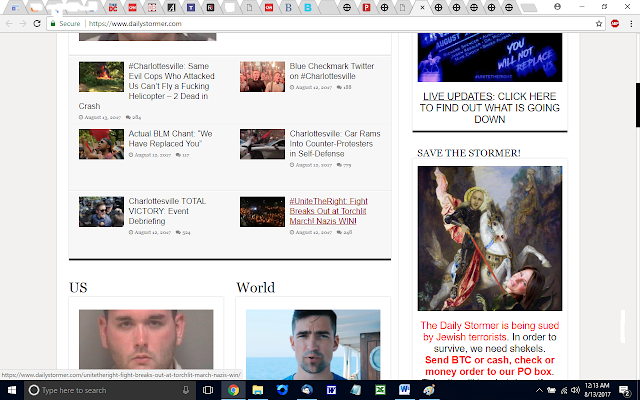 Update 10/23/17. I've argued with someone who is claiming the driver became angry and/or disoriented from a bat blow to the back of his car. However, the full video shows the car speeding down the alley, almost hitting people, before the person with the bat swung. Slow the video down to see.

Update 4/22/18. Another rally, but this one was a bust. Only 25-30 neo-Nazi and neo-Confederates showed up. The town didn't want the rally, and many townspeople counter-protested. I remember arguing with a white supremacist sympathizer that the movement was severely hurt by Charlottesville. I feel vindicated.

Update 7/23/18. The organizer of last year's rally in Charlottesville is trying to organize an anniversary rally both there and in Washington DC. It's not going well due to fragmentation in the alt-right. Update 7/24/18. He failed in spectacular fashion. Must read.

Update 12/7/18. James Fields was convicted of first-degree murder. One piece of information that was new to me: he had sent friends a meme about running over protesters in the weeks prior to when he actually ran over protesters. The information was presented in court as evidence of his state of mind.
Posted by ModeratePoli at 10:01 PM