I'm a bit late on this story, though it's still relevant and may be relevant for a while to come. Like Kelly, Trump's new chief of staff, McMaster was generally considered a wise choice, and not a known crazy.

Unfortunately, some Trump supporters like crazy. McMaster is therefore having some problems and riling up some folks. He's been trying to clear out some of the crazy that was appointed to the National Security staff, and there's pushback. So far, the pushback has been ineffectual. Trump has indicated support for McMaster, and hasn't tweeted catty comments as he did with Jeff Sessions, the Attorney General.

Bannon, who is a patron to many of these crazies (as part of his position as the near-alt-right), has been keeping his head down and avoiding the volleys. It's interesting to see which parts of the conservative media are on which side.

One right wing favorite wrote a memo about how there's a shadow government in the US, and it's not being displaced as it ought to be. The author has now been displaced, to the howls of some. There are complaint about 'the deep state' and Obama holdovers, both of which are probably traitors. It's a damn shame that this chance to finally clean up those damn socialists is slipping away. If America isn't great again, it's because of those traitors that got to stay on. 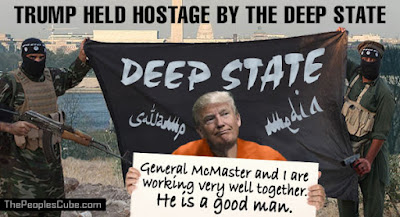 
Extra. Not particularly connected, but a taste of Russian 'news.' It would be a horrible template for news here.

Update 8/14/17. I was right about relevance. Here's a pair of articles about the feud and ideological differences between Bannon and McMaster, include lies peddled on (wait for it) Alex Jones' show.
Posted by ModeratePoli at 5:46 PM