Last outpost of crazy: The Donald

Mr. National Comic Relief (and I don't mean Joe Biden) is doing it again. The Donald says he's ready to be on the ticket with Mitt Romney. Well, Romney earned this embarrassment with his fawning acceptance of Trump's endorsement.

This came up during an interview by Barbara Walters. Please, all journalists, no matter how lowly, don't talk to this walking embodiment of self-importance. 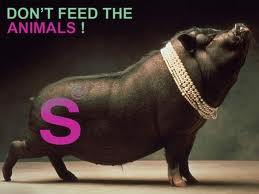 Update 5/28/12. The Donald is now lashing out at George Will, who pointed out that Romney shouldn't be campaigning with the Donald because of his continuing birther nonsense. I've got to agree with George Will on this one. Trump is an embarrassment, not an asset. Maybe he'll say something really incredibly dumb, and sink the Romney campaign. What an ironic joy that would be.
Posted by ModeratePoli at 1:20 AM