Yesterday 43 Catholic organizations filed suit against regulations from the Obama administration mandating contraceptive coverage in healthcare plans that cover other prescription drugs. Commenting on the news story, I wrote:


"This is happening because there’s a silly contest over who has power on this issue: the government or religion. It’s definitely not the people or the employees whose voices are being listened to."


"Tell me again why your defending First Amendment rights is a 'silly contest'? Keeping the Government out of Churches has always sounded like a good reason to have a Bill of Rights. Freedom of Religion is a fundamental right in the United States, regardless of the voices of the 'people or the employees.' "

So this is my fuller explanation:

@John Powers, when churches stick to being churches, the government leaves them alone. When they become big employers, government is right to get involved in ways they are involved with other businesses/employers. But the churches-cum-employers then try to hide behind first amendment/freedom of religion, when, really, they just aren’t being allowed to conduct their employee relations the way they want. Maybe the churches want to avoid minimum wage or overtime laws too.

The reason this is a silly contest is that the Catholic Church in this country has lost the argument about contraception with its own adherents, yet the Church continues to pretend that contraception is so wrong that it can’t countenance including it in comprehensive medical plans. On the government side, it’s silly to mandate insurance coverage for pills that cost $9 a month at Walmart (not a myth–I looked it up). Yes, it is silly to anyone not wrapped up in the power play. 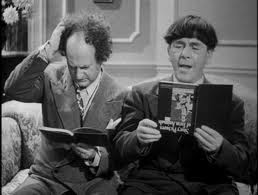 Who is sillier?
Photo: fanpop.com
Posted by ModeratePoli at 12:12 PM

Since you are demanding answers to your loaded question, how about answering a reasonable query in return:

What business does any church have in supporting or denying the individual choices of either those that belong to the church, or those that they simply employ? Whether the insurance "covers" contraception or not, it's still the individual's choice to use it, right?