Rant: This election is important!

With the primaries over, the election news is mired in trifles even more than before. That stinks because this election is important, but not for the talking point reasons that the GOP intones (pregnant pause) "THIS IS THE MOST IMPORTANT ELECTION IN OUR HISTORY BECAUSE WE NEED TO STOP AMERICA GOING DOWN THE SOCIALIST PATH." There's a grain of truth in that pile of horseshit, but the GOP isn't going to separate it for you.

The grain of truth is that there are a hell of a lot of fiscal issues facing the next Congress. The GOP is trying to avoid the sequester of defense funding it agreed to just last August by cutting social programs. I will bet anyone that there won't be an agreement passed on that issue. But that's just the beginning. The Bush tax cut expire again at the end of the year. They blew quite a hole into the budget, plugged (if you can call it that) with borrowed money. Then the recession and a large Dem spending splurge made the deficit even worse. (Where is all that money going?) The only action that has decreased the deficit is the sequester that the GOP are trying to undo. However, the Dems haven't presented themselves as the champions of fiscal prudence either. It's insane that with such important decisions to be made, we have news cycles devoted to:
This dreadful list will only get longer. (Yesterday, Romney said he deserves credit for the resurrection of the auto companies.)

Oh God, this is like the South Park episode where Stan refused to vote for a school mascot because the choices were 1) a giant douche, 2) a turd sandwich. Only after 20 minutes into the episode did I realize that it was a metaphor for most of our elections. Dems and Repubs--turd sandwich or giant douche? Our pick.

So, why could this election possibly matter if the choice is a douche or a turd sandwich? Because that's not the actual choice. The choice is Republicans who have little respect for government slashing the federal budget in many places, but especially where it hurts Democratic constituencies the most. The alternative is Democrats indiscriminately protecting as much as they can. Pick your poison, or try to balance them so that neither gains too much power. 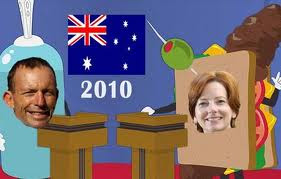 Unfortunately, the "don't let either of them get too much power" is only a recipe for absolute stasis. I know, I know, the Madisonian system relies on compromise and all that. But we just don't have that kind of politics anymore. Witness the Mourdoch definition of compromise ("compromise is where the Democrats move to our positions," almost an exact quote). Put up something from Firedog Lake if you don't like the Mourdoch quote, but the fact remains that our politics have shifted.

So, either one of the other gets a large enough majority to govern (and I'm afraid that means govern without input from the minority, because the parties don't input to each other anymore) or nothing will get done and all the problems will just get worse. I know, I know, this isn't supposed to be a parliamentary system. But what the system is supposed to be and what we got are two different things.

So, I'm afraid the only real choice is whether one prefers turd, crap, or paralysis. That's all this restaurant has in stock. And, of course, it is really no more than the American people deserve. After years of electing whoever told us what we wanted to hear (usually along the line of having cake and consuming it also while keeping our bodies and belongings safe from THOSE PEOPLE) now we are about to get bitten -- big time.

For what it's worth, I suspect the only realistic governing setup coming out of this election is a Romney administration with majorities in both houses. They won't have 60 votes in the Senate, but the Republicans are mostly interested in Ryan-type spending changes and that can be done by reconciliation. Dreams about Romney governing as a moderate are, I'm sorry to say, only fantasies. That would require him to squarely defy the most powerful and energized bloc of the GOP and it should be obvious by now that he will do no such thing.

If Obama wins there will be no effective Congressional majorities and so continued gridlock. Also any SCOTUS vacancy will have to be filled by recess appointment (any vacancy at all will be filled that way, I guess) with the accompanying hew and cry. Of course, Romney will have the same problem come to vacancies.

And so it will continue, until the parties change or the system becomes so dysfunctional that we have to simply accept that Madisonian democracy cannot work and replace it with an out-an-out parliamentary system that can function in the presence of strong parties. Either way, it will take at least ten years, likely twenty or thirty, and maybe a hundred. Pity, but we have brought this on ourselves, and should not be surprised if no one else pities us very much.

Tantalizing arguments. You MUST tell me, what are the wider and deeper problems?

I don't agree that the only realistic governing setup is GOP control of House, Senate, and presidency. Maybe it's a pipedream to think we can break out of the cycle we've been in since 2000 of ricocheting between GOP control and Dem control, but really, that hasn't been working either.

I prefer more August-like standoffs with a last-minute agreements to the GOP calling all the shots and enacting the Bush tax cuts with no expiration date, which is what they will do next time. Any discussion that doesn't address that key point is woefully incomplete, to my mind.

But, nonetheless, great points. You left me feeling mentally lame for a few minutes there.

Well, on the general point of our problems, I think they go to a corrosion of our basic trust in the country, the culture, and each other. Yes, I know that life looks a whole lot better outside of Washington and watching something other than the news. I know that a lot of what is going on is about elites. I know that much of the pining for a bygone day of comity (when Republican and Democratic Senators cooperated on the Civil Rights Act) is so much you-know-what, as there was plenty of hatred and division then (just ask any civil rights worker from the era).

Still... I can't help but think that about 20% of the country rather hates the opposite 20%. Not in the sense of wanting to do violence, but in the sense that if they woke up in the morning and discovered that the opposite 20% had died in their sleep, they would have a beer to celebrate. The 60% in the middle is angry, confused, grumpy, somewhat frightened, and liable over time to drift toward the extremes without clear direction and good leadership, neither of which we have (and one could argue neither of which our system can really provide anymore). The problems with the budget are, I think, in many ways an outgrowth of this, although as with all issues they become an active driver of dislike and division in their own right. As you yourself point out, much of the reason that the two sides are unable to reach agreement on fiscal matters is that each believes the other side isn't really interested in using the budget to help the country, or even in balancing the budget as a worthy act, but in using the budget to hurt their enemies as badly as possible. No, I don't think that we are about to have a war. But I no longer find that eventuality unthinkable. 1860 is a long way away, but it is becoming more understandable with each passing day.

As for the specifics you point out, I actually agree I would rather see that as opposed to a GOP governing majority. I was only pointing out that if we are going to talk about a governing majority, the only one I can see realistically coming out of the fall elections is the one I described (which would only work for matters available to reconciliation, which, however, are the kinds of things the GOP cares about). It is an observation on the state of the political situation, not a statement of preference.

You may be a moderate in Massachusetts, but if you ask the standard southern or western or mid-western conservative, you are a divisive socialist wanting to punish success. Why to they thing that? Because you want to do something about the deficit and the debt, and recognize that maybe tax increases might be necessary.

In today's GOP orthodoxy, as enthusiastically espoused by every one of their candidates. government is the source of all problems, taxes must always be cut, the Democrats are always wrong and cannot be given any credit for anything, Democrat initiatives must be stopped at all costs, and compromise means that the Democrat surrender.

I agree that this is an important election because if they can win a national election using that mode, we will never have compromise and reasonable policies from reasonable politicians in our lifetimes.

President Obama came into office hoping to mend the divisions. But it takes two sides to settle, and if one side can gain politic advantage by emphasizing the divisions, they will do so. Even now, they talk incessantly about "taking the country back", as if myself and the Democrats were some sort of occupying force. They openly talk that way. And if they win, even by a slim margin, they will claim an unstoppable mandate, and be unapologetic about slamming the Democrats in the Senate if they filiibuster even 10% of the times the GOP has.

So, yes, if the GOP controls the White House and Congress, they will enforce their will, and blame Obama for as long as they can get away with it for everything that isn't good under their watch, and take credit for anything that improves, even if it was a direct result of Obama-era policies.