The decision of whether or not to allow the construction of the Keystone pipeline will be made soon, I think. A lot of people have an opinion on this pipeline, but I doubt that many have actually sorted through the major issues. I haven't either, because I've found that getting answers on pollution is extremely hard. In other words, you can work very hard and not see any definite increase on your knowledge.

So if I had to decide, what criteria would I use? It's tempting to put my finger on the scale (for the pipeline, as the outcome that angers fewer people), but I'm trying hard to resist that temptation. The biggest reason for the pipeline is the jobs it would provide. With unemployment high and not many new industries developing, this type of project is too rare an opportunity--new development in sector that has a solid future and adds net earnings to the economy. (I assume federal and state governments aren't subsidizing this pipeline, but plan to reap net revenue gains. That better be so.)

On the other side are environmental considerations. The entire project is not doing the earth any favors. Extraction and refinement of this dirty oil will cause a higher level of pollution than many energy sources, even many other carbon energy sources. If this was a question on whether or not to develop this resource, the answer would probably be against development. However, it has already been developed, due to choices made by Canadians, not us. Also, this is not currently the dirtiest oil, so there is the likelihood of net environmental  benefit. We could choose to take the position that we won't participate in such a polluting enterprise--that would be principled stand for those who value the environment far above other considerations.

Since the US doesn't control the development of the tar sands, and since it isn't the dirtiest oil currently being used, the environmental arguments aren't a slam-dunk for me. The US control is only over whether or not to build the pipeline. So we should know what the dangers of the pipeline are, and we should minimize them. However, I'm not completely comfortable with this position. The more people are involved in the carbon energy economy, the less incentive we have to make incremental changes to cleaner energy. I may be making the mistake of valuing political peace, expediency, and jobs over the global environment, and that may very well be shortsighted and cowardly. 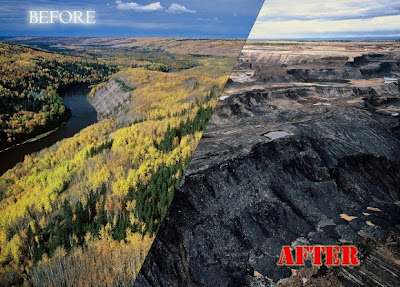 
Other sources on environmental impact:

Posted by ModeratePoli at 10:59 PM

Nice to see you taking on this issue, which is muddied by proponents and opponents alike with valid but inconclusive arguments that ignore the REAL reason for the pipeline.

First, note that there is already a pipeline. It has terminals in Oklahoma and Illinois. It's called ... the Keystone pipeline. What the controversy is over is the Keystone XL pipeline, which extends the current branch from Oklahoma to terminals in Texas on the Gulf of Mexico. Sure, there are refineries down there, but the MAIN reason the Canadian oil company want it built is not for the US jobs it will create. It's so they can more cheaply export the oil to foreign market. At present, they can't do so, and building a pipeline over the Rockies is far more expensive.

But in Congressional hearings, Democratic reps asked the Canadian oil company executive whether he could guarantee that if the Keystone XL pipeline were built that they would NOT sign any contracts to export the oil. The exec refused to answer directly, trying to obfuscate with nonsense about contractual commitments and such. Bottom line, they want more customers to increase the bid price.

Naturally, US oil companies also want the pipeline so that they don't have to compete with the Canadian oil in US markets. So the REAL issues are North American energy independence and consumer pricing. So US political proponents of the Keystone XL are really doing the bidding of US and Canadian oil companies, although they won't admit it. They'll talk about the jobs, purchased with higher gas prices later in the midwest. Opponents have real environment concerns, but we know how that usually works out against interests with money at stake.

From the Wikipedia entry on the project:

Proponents for the Keystone XL pipeline argue that it would allow the U.S. to increase its energy security and reduce its dependence on foreign oil.[75][76] TransCanada CEO Russ Girling has argued that "the U.S. needs 10 million barrels a day of imported oil" and the debate over the proposed pipeline "is not a debate of oil versus alternative energy. This is a debate about whether you want to get your oil from Canada or Venezuela or Nigeria."[77] However an independent study conducted by the Cornell ILR Global Labor Institute refers to some studies (e.g. a 2011 study by Danielle Droitsch of Pembina Institute) according to which "a good portion of the oil that will gush down the KXL will probably end up being finally consumed beyond the territorial United States". It also states that the project will increase the heavy crude oil price in the Midwestern United States by diverting oil sands oil from the Midwest refineries to the Gulf Coast and export markets.[22]

Thanks for many more points to consider on this issue. However, if I remember correctly, the Keystone XL is not just an extension beyond OK because it runs through Nebraska. That doesn't preclude what you say, which is that the oil is destined for bidders, which are possibly foreign.

If indeed the Keystone XL pipeline won't bring a net increase in oil available to the US market, that's important to consider.

Unfortunately, many policies aren't sold/defeated on their merits/demerits, but on purposely confounding arguments.

There is an additional proposed pipeline -- I think a larger one -- that runs from Montana to the same terminus in Oklahoma, provided they complete the link to the Gulf of Mexico. That's the one which would generate many of the environmental concerns as it cross to aquifer.

I'm pretty sure that if the Canadian oil company, TransCanada, agreed to keep the output in North America (at least mostly), the Obama administration would probably let it go forward with a lot of regulation to insure against environmental problems. But since the whole point for TransCanada is export away from the US, they will never agree to it.