Last year I wrote a brief post about a massacre that was averted. This time we weren't as lucky. The parents tried to stop their crazy son, but his demeanor fooled the police. Now six people are dead, 13 are injured, and countless are traumatized.

We should do something about keeping guns out of the hands of people in questionable mental states. We should be able to heed the warnings of friends and family and prevent the potential murder sprees that people are aware of. Here, despite the awareness, despite the actions of the concerned parents, the murderer was able to carry out his plans.

Maybe Senators Toomey and Manchin will resurrect their intelligent bill on gun purchase restrictions. However, it was a failure last year, and the NRA and knee-jerk idiot gun-rights nuts all over the country probably aren't any more reasonable this year. So we should do something, but we won't... because we live in the Land of the Free to be Idiots-With-Guns. This is one of the taxes we Americans pay, but it's a tax in blood and lives. 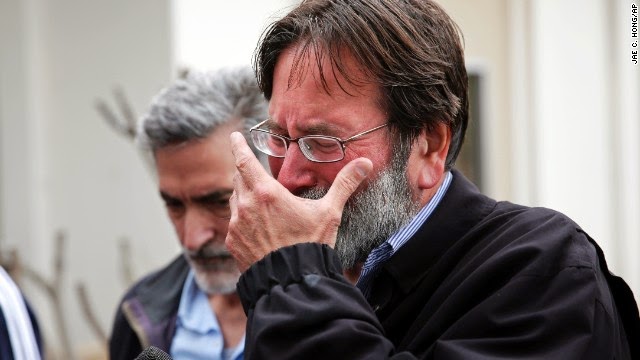 One of the many fathers
Image: cnn.com
Posted by ModeratePoli at 8:53 PM

What the Idiots With Guns don't realize is that having a gun makes them the primary target for anyone with criminal intent. Further, if actually facing fire, most would immediately pee their pants and / or shoot the wrong person.

Definitely the glib tag line about a good guy with a gun is so disgusting. It's designed to sound good, not to be close to the truth. The NRA isn't interested in any solutions (which would only be partial solutions, not 100% guarantees). They want to protect their rights, and that's all they care about.

They only care about stopping mass shootings in that it might spur legislation affecting their rights, so they pretend that more guns and more concealed carry would help. But mostly they do it to have a talking point for all their allies. Otherwise they would look uncaring or ineffectual when people demand that government "do something." They aren't honest enough to admit that this is a predictable consequence of the gun rights they treasure, so we need to live with it. Oh well. Another day in America.