I've been thinking lately that the fighting in the Middle East seems different in a vague way. A key here is the vagueness, If I can figure out more precisely what is different, I'll might have a new, important insight that I didn't have before. So let's try.

Al-Queda, ISIS, and Boko Harum seem amazingly cruel. They blow up mosques, they blow up markets, they gun down students, the latter two kidnap girls and boast about selling women as slaves. It's barbaric, and it's definitely not in the stream of 20th century Western European behavior.

So, does it seem strange just because it's cultural different? Maybe. I'm surrounded by a liberal-tinged expectation of civility, support for the unfortunate, fair competition rather than conquest, electoral democracy, freedom of speech and religion, and all that.

Perhaps the ISIS and Boko Harum practices seem strange because they are culturally different. However, that explanation doesn't really work well. Japan and China are cultural quite different without causing the distaste and fear that ISIS/Boko Harum do. Besides, Japan, China, Europe, South American, and the US manage to get along.

What's really horrifying about is how the extent of the rejection of modern, western civility. Even the Taliban, who dynamited a precious piece of history (a huge hillside carving of Buddha), didn't go this far in their rejection of modernity. They didn't try to bring back slavery.

I seriously wonder how this philosophy can appeal to many people, and whether it has much of a future. Certainly, modern life has its bad side. We live in crowded conditions, have cheap, unhealthy entertainments, cheap, unhealthy food, and lives with less meaning and purpose than we'd like. But it seems to me that slavery and beheadings aren't the antidote to modernity. Do some people really want to go back to the cruelty of the past? For some, it seems that the answer is 'Yes.'

ISIS in particular is using cruelty to provoke a response. It hopes to provoke a war between Christians and Muslims, and has lately been ramping up the killings and abductions of Christians. Evidently they would relish all-out war, but the western countries aren't going to give it to them.

It's a better strategy (for the West) to limit their involvement, and let the cruelty of these radicals lead to their isolation. Already Jordan and Egypt are taking a stronger stand against ISIS. If only Turkey, Saudi Arabia, and the Emirates weren't so slow in denouncing ISIS and seriously fighting against them. Of course, that is part of the reason ISIS, Al Queda, and Boko Harum have grown--there is too much support for any Muslim fighters, and their cruelty has (up till now) been a selling point. I certainly hope that has finally tipped. Maybe the supporters, who used to cheer the occasional bombing in Israel or the West, are finally repulsed by the amount of blood. It's about time. 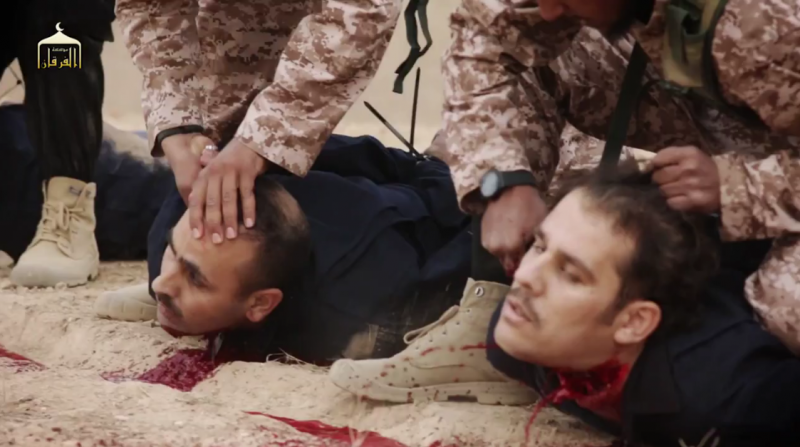 Extra. A fascinating description of the religious underpinnings of ISIS.
Posted by ModeratePoli at 6:08 PM